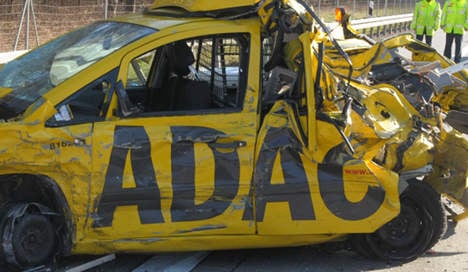 Germany's biggest motoring association, ADAC, has had a car crash of a weekend. Photo: DPA

It emerged on Sunday that communications head Michael Ramstetter had bumped up the number of votes cast by ten times to make the VW Golf 2014's car of the year. Bild am Sonntag reported Ramstetter claimed 34,299 were cast for the VW Golf. In reality it was 3,409.

On Monday the Munich-based company admitted that this was just the start of the scandal.

Ramstetter had, the Süddeutsche Zeitung reported, lied about participant numbers in at least 2012 and 2013, in order to make the prize, and therefore the company – which has 19 million members – appear more important.

It is unclear how many years the manipulation of the award has gone on for.

Whether this meant Germany's top car award, the “Gelber Engel”, was a total fix is unclear, as the ballots were destroyed for “data protection reasons” the paper said.

“I've messed up and cooked the numbers,” long-standing employee Ramstetter told the Süddeutsche Zeitung shortly after being sacked on Friday. His boss, head of ADAC Karl Obermair, has ordered a full investigation into his actions.

“Credibility and trust are our key commodity,” Obermair told the newspaper, adding that ADAC would be apologizing to car manufacturers. The award was a respected gauge of cars on the market.

ADAC management said it was unaware of the deception and pledged to conduct the ADAC Motorwelt readers' survey under the supervision of independent legal observers in future.
At a televised press conference, managing director Karl Obermair said he would stay on in the post, saying that Ramstetter "is not a pawn sacrifice, but a high-ranking executive of the ADAC".
Pledging a full investigation, he said ADAC staff were demoralized by the scandal and had reacted to the news with "an emotional mix of outrage, anger and disbelief".
Ramstetter was also editor-in-chief of ADAC's car industry magazine Motorworld. He was photographed by the Bild newspaper heading off on holiday on Sunday following his dismissal. "It's a write-off," claimed the paper, after the 111-year-old association's admission.

Speaking for many in a country where the car is sacred, Transport Minister Alexander Dobrindt demanded that ADAC "put the cards on the table" and provide full transparency over what went wrong.

ADAC is best known in Germany for its "yellow angel" roadside assistance patrols which rush to the aid of stranded drivers, as well as for its rescue helicopters.

But the Munich-based club is also a major lobby group and corporate operator which tests vehicle safety and sells commercial services from car rentals and insurance to holidays and long-distance bus services.

It also came under fire in 2005 for fixing a test of the budget, Romanian-built Dacia. It put out a press release saying the vehicle was unsafe while later transpiring the company had purposefully damaged the wheels to make it perform badly, the Frankfurter Allgemeine Zeitung revealed.

Green party parliamentary leader and transport expert Anton Hofreiter said that the ADAC or Allgemeine Deutsche Automobil-Club "cannot afford a fraud on this scale", pointing to its "public responsibility".