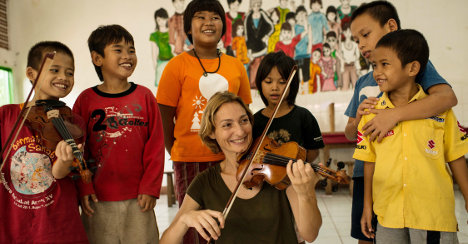 Sara Michieletto has performed with top orchestras across Europe during an illustrious career and since 1998 has played in the first violins of the orchestra of the Fenice opera house in Venice.

But more recently the 41-year-old has played for children across the Palestinian territory of the West Bank, in Indian slums and helping street kids and orphans in Indonesia.

"In the case of children from disadvantaged backgrounds, this is so important because they have faced a lot of difficult things in the past and trauma," she said.

"Music is a very powerful means of conveying emotions."

Since 2010 the violinist has been working with street children in and around the Indonesian capital Jakarta, a seething metropolis of 10 million people where many live in grinding poverty, as well as other parts of the country.

'We are a lot calmer'

At a recent workshop at a centre for rescued street children on the outskirts of Jakarta, a group of youngsters raced up to Michieletto and embraced her as she entered with her violin case slung over her shoulder.

A small group looked on as she drew the bow over the violin strings, playing a concerto from Antonio Vivaldi's "The Four Seasons".

As well as performing for the youngsters, she organises workshops in drama, singing, photography and dance.

Among the children at the recent workshop was Suharti, a 14-year-old girl who spent years living on the streets, busking on overcrowded, sweltering trains or buses to make a living.

The youngster, who like many Indonesians goes by one name, was rescued and brought to the Kampus Diakonia Modern centre – which has living quarters and a school – along with her younger brother and sister.

"Everything feels very unpleasant when you are on the streets," she said.

"I always felt ashamed of myself every time I was busking."

But she has found a new, more peaceful life and feels that Michieletto's music has been a great help to her and the other children.

"We used to fight each other in class but since Ms. Sara started coming here, we are a lot calmer and more keen to study," she said.

Sotar Sinaga, in charge of organising music programmes at the centre, said the music had made a substantial contribution to helping Suharti.

"The way she (Suharti) expresses her emotions is much better now – she is no longer mean to her friends," he said.

Michieletto started playing for underprivileged children in 2004 when she toured schools around the West Bank for several weeks, and in the decade since she has played for thousands of children around the world.

Under a special arrangement with the Fenice Foundation she is able to carry out her charitable work and continue playing with the opera house's orchestra for a short period each year.

And while playing for underprivileged children is a world away from sold-out performances at world-famous venues, she says it brings her just as much happiness.

"When I play for the children, for me it's like playing in an important concert," she said.