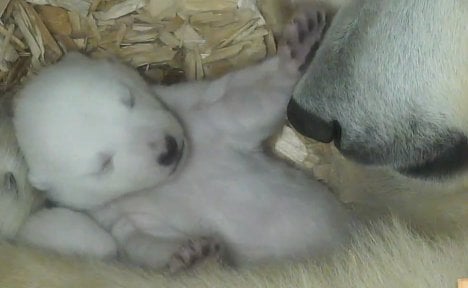 Mother bear Giovanna cradles her cubs in her paws as they gradually open their eyes for the first time. Photo: Youtube/screenshot/Hellabrun

Polar bears are blind for several weeks after birth and it was not until Tuesday that they got a first view of their mother and the enclosure in which they spent their first weeks.

Mother bear Giovanna gave birth to the cubs just over a month ago in what was thought to be the first polar bear birth on colour film, with the first cub weighing just barely 400g at birth.

The cute moment the 33-day old bears opened their eyes for the first time was also caught on video.

Keepers have good reason for delight at the cubs' progress, as polar bears are at more risk of dying in the first week of life than nearly any other mammal.

The babies will also be kept separate from their father until they are fit and healthy enough, the zoo said, mirroring the way polar bear mothers in the wild avoid their mates for the period early after birth when the cubs are most vulnerable.