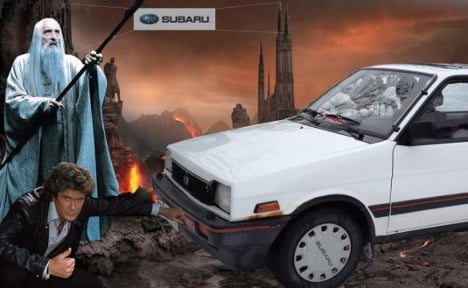 “It's a bizarre situation. In the last week I went from being jobless to writing for one of the biggest automotive magazines in Sweden,” Nils Jangen, 28, told The Local.

Jangen's unlikely journey out of unemployment took place after one last-ditch effort to raise some cash after months of joblessness had left him nearly broke.

Having relocated to Sundsvall last August to accompany his girlfriend as she continued her studies, Jangen didn't realize that finding a job in the eastern Swedish town would be so difficult.

“I knew it wouldn't be easy, but I had no idea it would be so tough,” he explained.

With his savings near zero and no job offers in sight, Jangan found himself with no other choice than to sell his trusty Subaru, a hatchback that had been in the family for nearly two decades.

“I'd sent off 200 CVs and had only been to one interview. I was getting pretty desperate,” he said.

So one evening in early January, Jangan set about writing up what he hoped would be a winning ad to be published on the Blocket buy-sell site.

“I included a bit of humour thinking it might help get my car sold. It wasn't going to sell itself; it's really an old beater,” he said of the white 1985 Subaru Justy J10 Trendy.

Jangan's creative muse resulted in an ad that placed his car in a scene from the Lord of the Rings film, complete with a fierce looking Saruman. To spice things up further, Jangan cut and pasted an '80s-era picture of US actor and cult hero David Hasselhoff giving a thumbs-up sign.

“I included The Hoff because my girlfriend has this weird sort of crush on him. That's why he's there. After I'd put in scenes from Mordor, I figured 'Why not add The Hoff?'”

In the text of the ad, Jangan referred to his car as a “Japanese mountain goat” featuring “the power of 54 frighteningly well-hung horses”, adding that it was “hand-forged in the darkest of Japanese industries” by “the Saruman of carmakers”.

“The car has seat belts in all seats built with the 1984-patented I.D.N.R.I.S, which stands for Instant Death No Retardation Impact System. In other words, there is no risk of ending up in long-term care because you die immediately in any collision at speeds higher than 12 km/hour,” the ad read.

While listing an asking price of 10,000 kronor ($1,500), Jangan added in the ad that he would be willing to trade the car for a job as he was “in a city where the prospects for the future are on a par with those of North Korea”.

After publishing the ad on a Monday, Jangan didn't think much about it at first. But the ad struck a chord with Blocket users, who shared it widely via social media, leading to a write up in the local Dagbladet newspaper.

And when Jangan checked his email on Tuesday night, he shocked to find hundreds of new mails inquiring about the car and praising his creativity.

Among the many emails were dozens of job offers, including one from motorsports magazine Auto, Motor, & Sport.

“I've always dreamed of being an automotive journalist – probably watched too much Top Gear in my time, so I said yes right away,” Jangan recalled.

The Monday following the publication of his ad for the Subaru, the previously jobless Swede found himself working under deadline pressure at the magazine.

“I'm getting thrown in at the deep end. It's really exciting,” he said.

“I'm doing my best to pretend to know what I'm talking about. I don't have any formal training as journalist or a writer, but I'm pretty into cars so at least I have some credibility.”

It was ultimately sold for a few hundred kronor to a local auto repair shop, which plans to use it as a mobile, four-wheeled advertisement.

WATCH: David Hasselhoff goes chest to chest with a younger lookalike on his own Swedish talk show