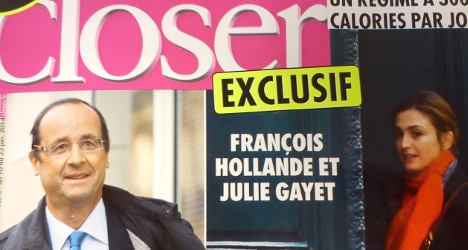 Claims that Hollande is having and affair won't undermine his flagging presidency, claimed one expert. Photo: Closer's front cover on Friday

France woke on Friday to claims in celebrity gossip magazine Closer that its President François Hollande was having an affair with French actress Julie Gayet. The magazine published seven pages of images, some of which claimed to show Hollande zipping across Paris in the dead of night to visit Gayet at her apartment.

The head of state has not denied the affair but has denounced “an attack on his private life” and has threatened to sue the magazine. The claims if true, will be a new chapter to add to the book on philandering French presidents, except this time Hollande's affair would have been made public while he was in power.

Here Frenchman Philippe Marliere, who is a professor in French politics at UCL London, tell The Local he does not believe reports of the fling will impact negatively on Hollande’s already flagging presidency, but he does say it shows France and in particular its media is changing, as well as highlighting a very real security issue.

"It's a very French story. Normally we don't like to mix people's private and public lives, especially when it involved someone as importand as the head of state. There will be plenty of reaction from people saying Closer shouldn't have run the story, because its his private life. It's notable hearing Hollande's complaints that he is talking about himself as a person rather than a president. He says "I am entitled to my private life".

“Things are clearly changing in France when it comes to the private lives of politicians and notably the president’s.

“Previous presidents all had affairs, that were not publicised at the time but are very well known now, especially when you think of François Mitterand, who actually had a child with a mistress. It was only revealed months before his death.

“Five to ten years ago, you wouldn’t have had a celebrity magazine like Closer running this story. You will still get a lot of cross people saying we are not interested in his private life, but they will be curious and no doubt rush out to buy the magazine or at least see a copy. In that sense the country is becoming more like the US or UK.

SEE ALSO: The French reputation for infidelity is 'a myth' “The publication of the images are a sign of an evolving French media. With the internet and social media, it’s practically impossible to keep these stories hidden anymore. There will always be people or websites willing to report them.

“Previously you just had the main papers like Le Figaro and Le Monde, whose editors would have known about the affairs but just said “nope we are not running it” and nothing would ever come out. That is not the case now.

“We are shifting slowly in the direction of the Anglo/American approach to the world of politicians. There’s a thin line between the right to privacy and the importance of knowing about our politicians. Those two things are very much intertwined in the US, where a story like this would finish the president.

“In France it won’t, we haven’t reached that point yet.

Affair claims will not undermine presidency

“It shouldn’t undermine his presidency. He is already a very unpopular president. People might even look at it and say “wow, she’s very pretty, how did he do that”.

“However he does has a very big press conference next Tuesday where he will have to convince people of the value of his economic policies. This is a distraction obviously, but he won’t be punished for the fact he has an alleged mistress. The heart of France will not be bothered about that although I am sure the public will be asking questions such as how he found the time to have an affair.

I think perhaps the major worry coming out of this story is the security issue. The magazine claims he went across Paris on a scooter with just one bodyguard, which in terms of security is far too light. That’s probably the main scandal here.”