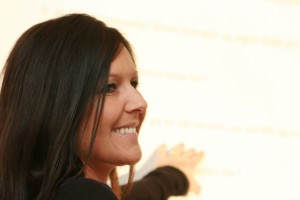 Tanja Rahm, the Danish ex-prostitute campaigning for a sex-purchase law in Denmark - Tanja Rahm blog
"This act has done more harm than good, and led to an unsafe daily life for prostitutes," Paul Joakim Sandøysundet, the leader of the Conservative Party youth wing, told the Vårt Land newspaper.
"The law isn't working the way it is today," Atle Simonsen, acting spokesman for the Progress Party youth added. "It is only leading to a hidden market."
Norway brought in the sex purchase law in 2009, following the Swedish model brought in in 1999, under which it is illegal to buy sex, but not illegal to sell it.
Norway's new right wing government has hired Vista Analysis to evaluate the impact of the law, before drawing up a white paper later this year.
The Conservative, Liberal, and Progress Parties all pledged to scrap the ban on buying sex during last year's election campaign.
Norway's push to end it's sex purchase law comes as Tanja Rahm, a former prostitute from Denmark, is campaigning for Denmark to adopt it.
"If sex clients are not criminalized, it means we are recognizing the right to buy other people. It is the same thing as accepting slavery, and I am against it," Rahm told Aftenposten on Tuesday. "I'm aware of the debate in Norway about reversing the law and I think it would be very sad if this happens."
Rahm's open letter "To those who buy sex", has been published in  Aftenposten, Sweden's Expressen newspaper, and Denmark's Avisen newspaper.
"If you think I ever felt any desire for you, then you are terribly mistaken," Rahm wrote. "I never once went merrily at work. All I was concerned for was to make quick money. I confused that with easy money, but it wasn't easy. It was fast though, because I quickly learned the many tricks to get you to come as soon as possible."