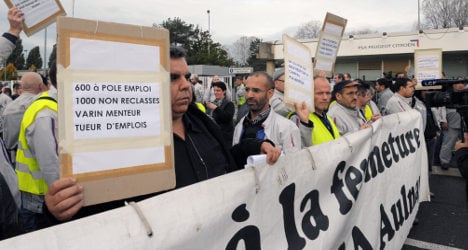 Workers from PSA Peugeot Citroën protest against the closure of their factory at Aulnay-sous-Bois. The French car industry has hit its lowest ebb in 15 years. Photo: Eric Piermont/AFP

The French auto market sank to its lowest level in 15 years last year with 1.79 million new cars sold and with only a hesitant rebound expected in 2014, data published Thursday showed.

"The 2013 vintage is to be forgotten," said auto market analyst Flavien Neuvy of Cetelem credit company.

According to CCFA, sales were at their worst in the early part of 2013, following on from a bad 2012 but recovered gradually in the second half.

In December, sales rose 9.4 percent, perhaps boosted by consumers anticipating a sales tax hike that kicked in on January 1.

Toyota sales rose 5.5 percent and Fiat, which completed a merger with Chrysler on Wednesday, rose 2.4 percent.

"We've touched the bottom of the pool and the market will remain stable in 2014," a CCFA spokesman said. Car sales in France ended the year at the same level as in 1997.

Elsewhere in Europe, Spanish car sales increased by 3.3 percent in 2013 while sales in Italy lost 7.1 percent.

Photo: AFP
The cuts have been earmarked for its short-haul business in France, which lost 189 million euros ($212 million) in 2018 and is expected to make further losses in the years ahead, the company said in a statement.
It intends to close or reduce the number of flights on loss-making routes and make use of smaller aircraft to reduce costs, as it confronts fierce competition from low-cost rivals and France's high-speed train network.
The cuts will accompany a reduction in capacity of 15 percent by 2021, the company said, with ground staff and customer services personnel set to be offered the voluntary redundancy packages.
“This plan will shortly be the subject of a consultation with relevant stakeholders. There will be no forced departures,” the airline said.
Canadian Ben Smith was named as the first non-French chief executive of Air France-KLM last year despite strong resistance from the group's powerful trade
unions.
The Franco-Dutch group, formed out of a merger of Air France and KLM, has also been caught in a power struggle between Paris and the Hague.
In February, the Netherlands purchased 14 percent of the airline, nearly matching the 14.3 percent held by France, sparking tensions over control and French warnings of instability in its management.
The move by the Netherlands was prompted by doubts over the alliance's strategy and worries that Dutch interests were being neglected.
Air France said Monday that its domestic operations had lost 717 million euros in total since 2013.
SHOW COMMENTS
Url copied to clipboard!