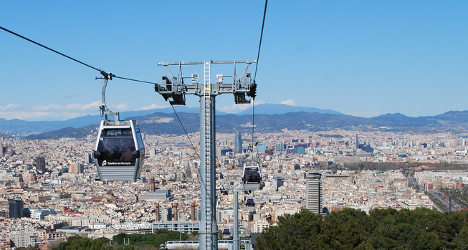 Passengers were left suspended 85 metres above the ground for just under an hour. Photo: Ivan Mlinaric/Flickr

Barcelona firemen were called in to rescue the seventy passengers, most of whom were tourists, after a mechanic failure left them suspended mid-air for just under an hour.

Four of the passengers were helped out of their cabin by firemen, who used a crane ladder to take them safely down to ground level.

Soon after, Montjuïc cable car's support engine was activated, allowing the 13 other cabins to complete the journey to the closest stop.

None of the 70 passengers were injured, Spanish news agency EFE reported on Monday.

Barcelona's Metropolitan Transport Association TMB has announced that Montjuïc cable car, which offers spectacular views of the city, will not be in operation for at least two more days.