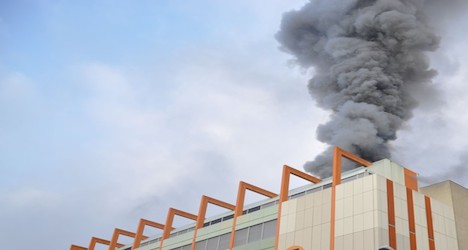 Plumes of smoke were seen above the ETA building. Photo: Solothurn cantonal police

The blaze was discovered on Sunday morning at the galvanic department of the main building of ETA, a subsidiary of the Swatch Group and a leading manufacturer of watches and watch components.

Swatch Group CEO Nick Hayek told the news website Blick.ch on Monday the fire could lead to delays of up to three months in deliveries of components to some manufacturers.

Hayek said Swatch Group was looking to see if some of the production could be relocated to other workshops.

Solothurn cantonal police said on Sunday one firefighter had to be admitted to hospital but that otherwise the blaze caused no casualties.

The police received a report of thick smoke coming from the ETA works at 8.45 am. Around 80 firefighters were dispatched and the blaze was extinguished shortly after 9.30 am.

Local residents were initially advised to stay at home and to close doors and windows because of a danger that chemicals had been released into the atmosphere.

Hayek visited the scene on Sunday and told media “the heart of watch production” had been affected. “Everything has been destroyed,” he said, according to 20 Minuten online.

The galvanic department, where metal is treated and made rust-proof, was completely gutted.

“The reasons of the incident are not yet known. The damages caused by the fire are considerable. It is nevertheless too early today to put a figure on the damage,” Swatch Group said in a statement.