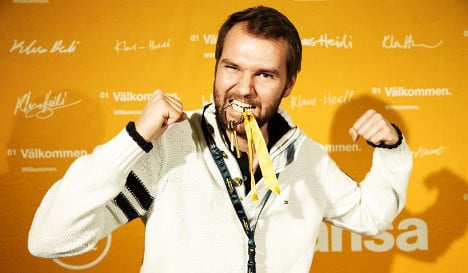 “1989 – a year of magical wonders, when I was born and the Berlin Wall went under”, Michael Andersson wrote in the first verse of a motivational poem which changed his life.

In October, German airline Lufthansa launched what may be the looniest campaign to ever take off: Swedes who love Berlin had the chance to win a new life in the German capital by proving their devotion – by legally changing their name to Klaus-Heidi.

"Hopefully at least one person will do it," Lufthansa's marketing specialist Magnus Engvall told The Local at the beginning of the campaign.

Andersson was one of 42 Swedes who did.

But there could be only one, and on Saturday the airline invited Klaus-Heidis and media from across the nation to a night of sausage, beer, and more songs about Berlin than anyone knew existed. And at the end of the night, a golden key in a decadent box was presented to Michael Klaus-Heidi Andersson.

“It was totally unreal. It was an intense party, and I wasn’t really nervous before the party, but I got nervous right before they revealed the winner,” Andersson told The Local. “And then I just felt really great. I've heard that Berlin is a beautiful place to go and there’s a lot happening there. So I want to see what it’s all about and discover Berlin.”

Andersson was born and raised in the solitary Swedish countryside, and currently works at a recruiting company in Fjugesta, a small town outside the city of Örebro.

“Fjugesta is a really small town, and I'm actually from the countryside far outside of the town. It’s very . . .private,” Andersson said.

That’s all about to change, as Andersson’s job contract ends on December 31st, and days later he sets off for a new life in bustling Berlin, where his new apartment – prepaid for the first year – awaits him.

“For the first few weeks I’ll probably just go around sightseeing and get a feel for Berlin. And then we’ll see what happens. I’ve told German media that I really want to get a job, but it’s really just that I want something to do, something to keep my mind active. So I don’t lose my mind,” Andersson laughed.

Andersson found out about the quirky contest from his brother-in-law, who thought it sounded like something he would do. He was right.

“I looked at it during the evening and just thought, ‘This is crazy',” Andersson recalled. “And then I went to bed and I just couldn’t sleep. I thought about it all night. And so the next day I printed out the name-change paper, filled it in, and posted it without telling anyone.”

He told his parents the next day – his dad was amused, his mum simply perplexed – and his colleagues the next day.

“I still think my grandma doesn’t know,” Andersson mused. “I have to go tell her and make sure she doesn’t have a heart attack.”

Each contestant had to include a motivational statement detailing why they wanted to win. Andersson, known among his family and friends for his humour and spontaneity, wrote his motivation in rhymes, with quirky lines in same vein of eccentricity as the contest itself.

"Small frogs, Volvo, and sill," the poem opens, referring to traditional Swedish midsummer songs, food, and cars. "Nein danke, I want something else." Andersson goes on to describe – more out of humour than sincerity – of his childhood dreams of bratwurst, German castles, and driving on the autobahn.

Other perks of Klaus-Heidi's brand-new Berlin life include private lessons in the German language, a bike with his name on it, two flights within Germany to go exploring, a travel bag, and a Berlin tourist card with free access to various museums and activities. Oh, and an apparently hunky neighbour named Dieter who, like the rest of Berlin, is eager to receive Klaus-Heidi.

In the meantime Andersson is tying up loose ends and preparing to become a Berliner.

“I think what I love about travelling is that you get to meet new groups of people with different habits from Swedes. They might be nicer, they might be crazier, grumpier, anything. I think I’m ready for something new.”

Even the mayor looks forward to meeting Klaus-Heidi.

"You guys are a bit crazy – endearingly crazy," Berlin mayor Klaus Wowereit wrote to the contestants in a statement read at the event. "And you'll fit in wonderfully here. Maybe only Swedes are capable of such craziness. But it's exactly that type of people Berlin needs!"