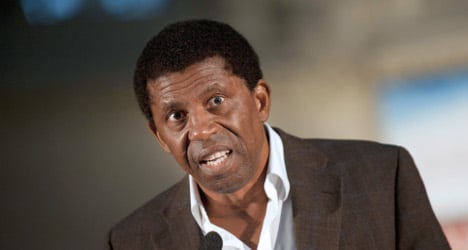 Haitian-born writer Dany Laferriere has become the first Canadian elected to France's Académie Française, the nation's pre-eminent body on the French language, it said on Thursday.

Laferriere, a 60-year-old novelist and essayist based mainly in Montreal, was elected to replace Argentine-born author Hector Bianciotti, who died in June 2012.

Founded by Cardinal Richelieu in 1635, the academy is tasked with maintaining the purity of the French language and publishes an official dictionary.

Members are elected for life and known as "immortals".

Born in Haiti in 1953, Laferriere has written more than 15 novels, many of them autobiographical

He won the prestigious Prix Medicis in 2009 for his novel "L'enigme du retour", an account of a return trip to Haiti after the death of his father.

His first novel in 1985, "Comment faire l'amour avec un negre sans se fatiguer" (How to Make Love to a Negro Without Getting Tired), was turned into a film for which he wrote the screenplay.

The academy's statutes do not contain any restrictions relating to the nationality of its members.

Arthur Pauly, a 15-year-old French schoolboy, was one of six candidates vying for the seat of former Académie member Hector Bianciotti, who died in June 2012.

Although the Académie are used to receiving all kind of applications, they were surprised this year when they received an application from teenager Arthur Pauly.

“Imagine if I get elected after making such a big effort. I would become Immortal at the age of 15. Wouldn’t that be wonderful?” the young hopeful was quoted as saying in his application letter.

Although the Académie has set an upward age limit of 75 for its members, there is currently no minimum age, meaning that the position is technically open to minors.

Sadly for Pauly he missed out, but on a positive note he has plenty of time left to fulill his ambition to become immortal.