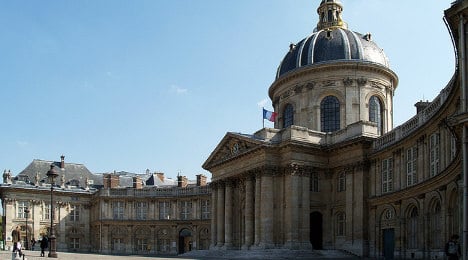 Arthur Pauly, a 15-year-old French schoolboy, is one of six candidates vying for the seat of former Académie member Hector Bianciotti, who died in June 2012, Le Figaro reported.

Known as the “les Immortels” (the Immortals) because of the institution’s motto, “À l'immortalité” ("To immortality"), there are a total of 40 members at the Académie Française, France's official authority on the French language, each of whom are assigned a number.

Once a seat becomes vacant, anyone may apply to the Secretary to be considered as a candidate. Members may also nominate candidates.

Candidates must then receive an absolute majority of the vote to win a seat.

Although the Académie are used to receiving all kind of applications, they were surprised this year when they received an application from teenager Arthur Pauly.

“Imagine if I get elected after making such a big effort. I would become Immortal at the age of 15. Wouldn’t that be wonderful?” the young hopeful was quoted as saying in his application letter.

Although the Académie has set an upward age limit of 75 for its members, there is currently no minimum age, meaning that the position is technically open to minors.

Explaining the Académie’s decision to let him run for the position, Académie member Marc Fumaroli was quoted in Le Figaro as saying: “He seemed both timid and audacious. His grandmother takes care of him. She had the idea to write his letter of application that was a lot better turned out than many of the others that we received.”

Pauly is one of a total of six candidates, who include Catherine Clément, Yves-Denis Delaporte, Dany Laferrière, Jean-Claude Perrier and Georges Tayar.

For his part, the 15-year-old was delighted. In a four-page interview written by journalist, author and Académie member Jean-Marie Rouart and published in the magazine Paris Match, Pauly demonstrated an impressive knowledge of the institution, which was founded by 1634 by the cardinal Richelieu.

During the interview, the schoolboy said that he had been inspired to apply after reading that a boy of 16 and a half had been elected by Académie in 1652.