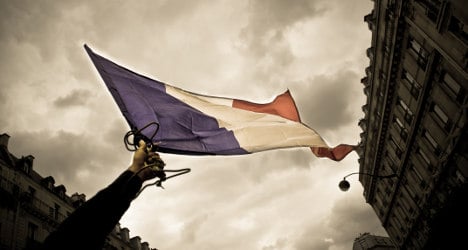 In the battleground of France's TV and radio industry, what can be done to fight back against the invasion of English in the French language? Photo: Cheng Ye

The French resistance to the growing spread of English terms wears on, with focus increasingly turning to France's TV and media, considered the front line in the battle to stem the invasion of Anglicisms.

But with defences regularly breached France is looking for a new battle plan to keep English at bay, hence this week's conference in Paris which brought together media chiefs, French language experts and government ministers to devise a plan on how to fight back against this “threat” to the language of Molière.

Some rules are already in place but they are clearly not effective enough. France Televisions has an agreement with French TV and radio regulator CSA, for example, that bars the use of foreign terms when a French one exists. The channel TF1's official "convention"  states it must "strive to use French titles for its programmes" and that "an advisor on the French language must be employed by the channel".

However, despite these regulations to protect the industry, the increasing creep of English into the media is evident. Indeed, you just have to look at the country's TV listings and the problem becomes clear.  "Secret Story", "The Voice", "Ice Show", "Hollywood Girls", are names of programmes you would expect to find in Anglo countries, not France. Perhaps strangest of all, given France's culinary traditions, is France's version of "Masterchef", which has kept the same name.

TV bosses and the various authorities tasked with guarding the French language, like the Académie Française, have long been aware of the dilemma and, according to one TV boss, the French public are hardening their views.

Nicolas Jacobs from France 2 says he received more and more mail from viewers fed up with the growing presence of English on their screens saying it is like being accused of being a "traitor or a sell-out".

"This is a new phenomenon," Jacobs told Le Parisien.

French – 'the most precise language in the world'

The problem, however, appears to be deciding what is acceptable and what is not and this predicament dominated Monday's conference at the Collège de France in the 5th arrondissement of the capital.

Yves Bigot, Director General of TV station TV5 Monde, told The Local that the introduction of an English term here and there in French conversation would be "acceptable", but not at the loss of the “precise nuances” of French.

“I don’t mind that we integrate certain English words into our language, as long as the rest of what is said is in excellent French,” Bigot said.

“It is important for French people to protect our way of thinking, how we express ourselves and our identity. These things can be translated into English but there are subtleties that cannot be precisely translated,” he added, concluding that “French is without a doubt the most precise language in the world.”

The conference was chaired by Patrice Gélinet from the regulator CSA.

Gélinet set the tone, when he called English “a threat” to the French language. He cited examples from Québécois (Canadian French), such as using “Je te call” instead of “Je t’appelle” as examples of francophone countries losing the ability to properly express themselves in French.

One of the major culprits blamed by experts for the creep of English into the French media was advertising.

Erik Orsenna, from Académie Française mocked the efforts of supermarket chain Monoprix to sound young and cool by using Anglicisms in its marketing.

For his part, Xavier North, a representative from the Ministry of Culture's General Delegation for the French Language and the Languages ​​of France, complained that “advertising is saturated with English words.”

However, he believed that it was not necessarily the fault of the advertisers.

“The media has to represent the society they are working in. They will not speak better or worse French than today’s society," he said. 'The greatest sin of the French is laziness'

Could it be that the French people get the language they deserve, so to speak?

Alain Rey, advisor to Le Robert, the publishing house responsible for the French dictionary, seemed to think so.

“The French people’s greatest sin is laziness. They have lost respect for their own language and the use of it,” he told the audience.

So what can be done to reverse the trend of Anglicization of the French media, and in society at large?

For his part, Marc Fumaroli, from Académie Française, the organization charged with safeguarding the French language, suggested that “minimum standards” for language ability should be imposed on French TV presenters and journalists, and that parents should take a more active role in promoting the language.

“Send your kids to the Comédie Française,” he proposed, referring to the famous French theatre, renowned for showing classic theatre by the likes of Molière.

His colleague Orsenna, had a more inventive proposal.

He suggested the academy could launch an annual awards ceremony to be called “La Victoire du Français” (The glory of French) – based on an existing award show for music, La Victoire de la musique – where awards would be given to French singers who best promote the French language.

For some purists, however, the roots of the problem go much deeper, and only a fundamental transformation of French society and politics can begin to resist the onslaught of English through the media.

Albert Salon, president of the association Avenir de la langue française (Future of the French language) told The Local: “The situation is catastrophic”.

“There wouldn’t be a problem if there was a willingness within the French government to promote French language,” he said.

“To resolve the problem, we must first change the government, secondly we need to pull out of the Euro and Europe, and thirdly to re-discover a national independence.”

“It’s not just about protecting the language; it’s about promoting and exemplifying it.”

Whilst perhaps not everyone present shared Salon’s radical suggestion for a solution, there was certainly a feeling of despair prevalent among the audience.

One Parisian spectator summed up the atmosphere nicely when she implored:

Each year, France’s Larousse dictionary holds up a mirror to society, showing its evolution by making official the words and phrases that were most important in the year previous. This year, in preparation of its 2023 edition, the dictionary added 150 new words, which according to the publishing company, “testify to both the vitality and diversity of the French language.”

These are the words that have gotten people talking the most:

After over two years of Covid-19, it is not surprising that a number of coronavirus-related words have entered the dictionary. “Covid long” refers to the condition of lingering Covid-19 symptoms, sometimes for weeks or months after infection. Other Covid-19 related words and phrases that are now included in the Larousse are: passe vaccinal (vaccine pass), passe sanitaire (sanitary pass), vaccinateur or vaccinatrice (vaccinator), vaccinodrome (vaccine center), and distanciel (at a distance).

The noun “wokisme,” which made headlines and sparked controversy this past year, is now defined by the Larousse as follows: “Woke-inspired ideology, centered on questions of equality, justice and the defense of minorities, sometimes perceived as an attack on republican universalism.”

Another word reflective of the political climate in France, “Séparatisme” has been added to the dictionary under the definition “the will of a minority, usually religious, to place its own laws above national legislation.” A lot of times, you will see this word in debates surrounding religion and immigration.

“Grossophobie” is defined as “a hostile, mocking and/or contemptuous, even discriminatory, attitude towards obese or overweight people.” In English, this word is “fatphobia.”

The rise of tech and all things crypto is not specific to the anglophone word. Now, the English acronym, NFT, has made its way into the French dictionary, defined in French as “Les jetons non fongibles” (Non-fungible tokens).

Finally, the Larousse dictionary added plenty of words with non-French origins, like “Halloumi” which is a type of cheese made from mixed goat and sheep’s milk that is originally from Cyprus.

The Larousse 2023 will also include other new words from different foreign languages, like konjac (a Japanese plant), kakapo (a New Zealand parrot), tomte (a Swedish elf) and yodel (a singing technique from the German-speaking Alps).

These are just a few of the 64,000 words that will be included in the 2023 version of the dictionary.