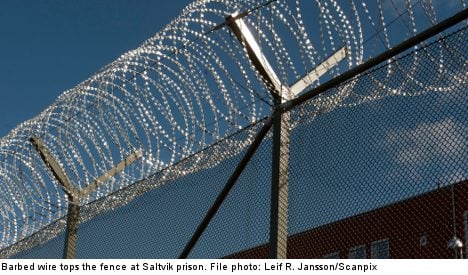 "I think this is a win-win situation for both us and the Swedes," Norwegian Justice Minister Anders Anundsen told Norwegian state broadcaster NRK. "They have spots available, and we have capacity problems."

On Monday Anundsen announced that he had sent a proposal to his Swedish counterpart Beatrice Ask, in hopes of finding a way to send inmates from Norway to Swedish prisons as early as next year.

The request comes as Norway struggles with a shortage of cells that police complain is forcing them to release criminals back onto the streets.

"We cannot live with the situation we have in this country now," he told state broadcaster NRK. "We have long prison queues, and that is why we have contacted the Swedes to see if it is possible to renting prison places there."

Earlier this year, Sweden closed down four prisons and a remand centre following a dramatic drop in the number of people being given jail sentences.

"We have seen an out-of-the-ordinary decline in the number of inmates," Nils Öberg, the head of Sweden's Prison and Probation Services (Kriminalvården), told The Local in November. "Now we have the opportunity to close down a part of our infrastructure that we don't need at this point of time."

Anundsen admitted he was unsure whether there were legal avenues currently in place to allow Norwegian inmates to serve time in Swedish prisons. However, he pointed to a 2009 agreement that allows Belgium to rent space in Dutch prisons as a possible model.

"Through eventual negotiations with Sweden, it would be natural to look at the Belgian-Dutch model and their experience with that solution," he told NRK.

Per Claréus, spokesman for Beatrice Ask, said on Monday that the justice ministry wasn't ready to comment on the request from Norway as the exact contents Anundsen's letter remained unclear.

"We're not going to say anything today. As far as I know, this letter hasn't arrived at the justice ministry today," he told the TT news agency late on Monday.

The number of inmates in Sweden has been falling steadily in recent years, dropping by around one percent a year since 2004, before sinking by six percent between 2011 and 2012, mainly due to lower sentences for drugs offences and minor theft.

In November, Öberg used an opinion article in the Dagens Nyheter (DN) newspaper to announce his agency was shuttering prisons in the towns of Åby, Håga, Båtshagen, and Kristianstad.

The closures came as part of a wider reorganization of the prison system that includes more national-level cooperation between prisons and an increased focus on reducing recidivism.