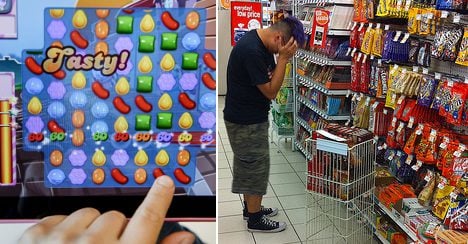 Candy Crush could take over your life. Photo: Jessica Gow/TT; bunny hero/Flickr
Candy Crush is the most addictive thing you can do legally, and it's the brainchild of a bunch of Swedes at King, a company that was recently ranked the best workplace in Sweden.
If you've read this far already, we can safely assume you've played the game before, but if you're among the minority that gets baffled when you hear whispers about Peppermint Palace or Bubblegum Bridge, then here are the basics.
IN PICTURES: The 5 stages of Candy Crush addiction – and 5 cures
Players use the app to rearrange candy-shaped objects into coloured groups. Once they're grouped, they explode, and more candy drops onto the screen. If you do this often enough within a certain amount of time or a certain amount of moves, you advance to the next level. And then you repeat the process until the train stops, the phone battery dies, or your boss notices.
But the game has a few extra features that really turn up addiction levels, specifically the fact that if you fail to advance to the next level five consecutive times, you're blocked from playing for 30 minutes. "Perhaps the most genius element of Candy Crush is its ability to make you long for it," wrote Time magazine earlier this month in a huge feature about why the game is addictive.
But what are the signs of addiction, or rather, the symptoms? And how do you get clean?
The Local offers five symptoms of Candy Crush addiction, and – if you users can stay focused long enough to get to the second half of the gallery – five potential cures.
Oliver Gee
Follow Oliver on Twitter