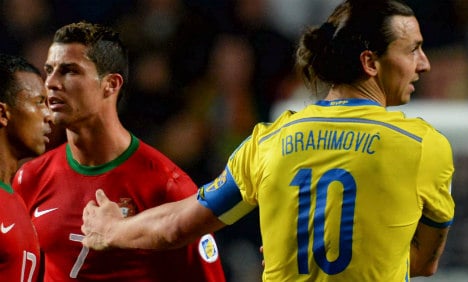 The Real Madrid superstar headed past Sweden goalkeeper Andreas Isaksson in the 82nd minute from six yards out after a fine left wing cross from Miguel Veloso.

Ronaldo, who now has 29 goals for club and country this season, almost made it 2-0 moments later when another header thundered back off the crossbar at the Stadium of Light.

But the Portuguese had to settle for a one-goal edge ahead of the second leg in Stockholm next Tuesday where star striker Ibrahimovic will be key to helping Sweden to the finals in Brazil next summer after a low-key performance on Friday.

Sweden went into the match unbeaten in Portugal, having won four and drawn three of the previous seven meetings between the sides but the occasion always promised to be tight.

In qualifying for the 2010 World Cup, the teams had fought out a pair of 0-0 draws with the Portuguese, like this time around, having to eventually battle through the play-offs to make South Africa.

Portugal were boosted by Ronaldo's return from suspension although they were without attacking midfielder Danny and goalkeeper Anthony Lopes, who are both injured.

Sweden were looking to slam the door on their rivals having conceded 14 goals in qualifying before Friday.

The first-half was predictably nervy with opportunities at a premium.

But Isaksson forced Mountinho out wide and the Portuguese player could only find the side netting.

A minute later, it was the visitors' turn to threaten.

Mikael Lustig sprinted down the right flank before unleashing a fine cross for Johan Elmander but the Norwich City striker could only prod the ball just past the right post of Rui Patricio in goal.

Ronaldo briefly threatened after 17 minutes but hit a lazy free-kick into the Swedish wall.

Ibrahimovic was similarly subdued with his only contribution being a decoy at a free-kick from which Kim Kallstrom missed the target.

Portugal looked the more dangerous early in the second half with Helder Postiga and Pepe both unable to force the ball past Isaksson in a frantic scramble.

The ball broke out to Ronaldo whose drive flew over the top.

But the Real Madrid star was to have the final word on the night.