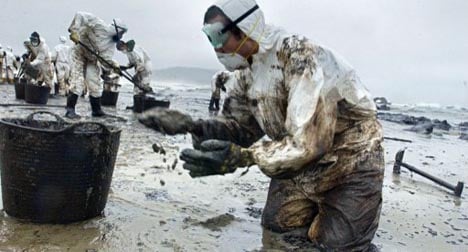 Some 1,700 kilometres (1,050 miles) of coastline were blanketed with black slime, prompting 300,000 volunteers to come out to clean the beaches. Photo: Christophe Simon/AFP

Plaintiffs have called for prison sentences of between five and 12 years for the Greek captain, Apostolos Mangouras, 78, his Greek chief engineer Nikolaos Argyropoulos and the head of the Spanish merchant navy at the time, Jose Luis Lopez-Sors.

A co-defendant, the ship's second officer Ireneo Maloto of the Philippines, is on the run.

The high court of La Coruna, in the northwestern Galicia region, heard eight months of testimony from more than 200 experts and witnesses in the trial that opened in October 2012.

The Bahama-flagged Liberian tanker spilled 50,000 tonnes of oil into the sea when it capsized in the Atlantic in November 2002, choking the coasts of Spain as well as Portugal and France with thick black oil.

Mangouras blamed the spill on the Spanish authorities which ordered the ship out to sea after it sent out a distress call due to a crack in its hull.

Mangouras, along with lawyers representing Mare Shipping, the company that ran the Prestige, said the order caused it to break up in a storm and spill its load over six days adrift.

"The ship was cracked and they sent it out into the ocean," Mangouras told the court in November. "It was the worst alternative. They sent us in a floating coffin… to drown."

Lopez-Sors said he had ordered the ship away from shore to lessen the environmental damage from the spill.

That decision did not spare 1,700 kilometres (1,050 miles) of coastline, which were blanketed with black slime, prompting 300,000 volunteers to come out to clean the beaches.

Maria Jose Rodriguez Docampo, the lawyer for Mare Shipping, told the trial that heading out to sea was "suicidal" and "worsened the structural damage" to the Prestige.

All the defendants are aged over 70 and are expected to be exempted from spending time behind bars.

Spain's current conservative Prime Minister Mariano Rajoy was deputy premier at the time and initially downplayed the gravity of the accident.

He repeatedly described the black spots that appeared in the sea where the tanker went down as "small threads of clay".