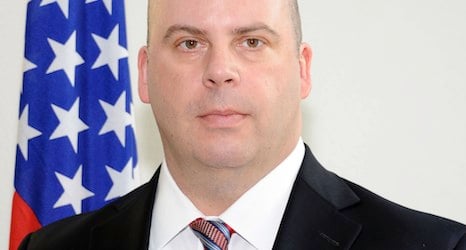 What have you found to be the best thing about being a diplomat here?

And I have found the Swiss people to be very open, pleasant and welcoming, which is not a stereotype of Swiss people.

Where were you previously posted?

My first posting was in Dhaka, Bangladesh, which I don’t think you can compare with Switzerland. I also served in Germany, in Berlin, which when I was there was still very much two cities, East and West.

I also did my time in Washington, and from there I went to Israel. I was actually resident in Jerusalem and responsible for a lot of the Israeli-Palestinian joint programmes that we do towards reconciliation and peace.  And that is the most intense place I’ve worked both in terms of the political atmosphere and the work itself.

In my first two years there the secretary of state visited 28 times, the president visited twice. Then I came to Switzerland . . .

Where the pace must seem a lot slower?

I think there’s more happening than you realize. It’s in Europe but it’s not a member of NATO or the EU. That makes our work with Switzerland when it comes to multilateral issues very, very important because we want to make sure we’re engaged with the country the way we’re engaged with EU and NATO countries.

What things took some getting used to?

For me it was the planning. When I first got here my wife and I decided we were going to have a party, so we invited people three or four weeks before and that just was not enough time for most people. So that was a shock, especially coming from Israel and the US where you don’t need this lengthy planning time.

The Swiss are probably the most pragmatic people I’ve ever met, which is a good thing. But it can sometimes be a lengthy process to think through things and you have to adjust your expectations as to how quickly someone’s going to react. But I’ve learned that a little bit of patience goes a long way in Switzerland.

Any Swiss rules or regulations that have caused you problems?

(Laughs) Nothing that has caused us problems. But I do think people make excuses for us as foreigners. I was told you couldn’t flush your toilet after 10 o’clock at night, which isn’t true. Although I grew up in an apartment building, so living in a high density environment is something I’m accustomed to.

How do you get on with your neighbours?

We’ve been very fortunate with our neighbours. I live in the old city of Bern and the downstairs neighbours invited us down right away. They have the ground floor with a garden that goes all the way to the Aare river and they gave us a key so that we could use the garden. It’s so different from what people had told us coming to Switzerland that ‘you won’t get to know your neighbours, you won’t get to know people’.

What advice would you give to a diplomat coming to this country?

I would definitely encourage anyone coming here to get a book on Swiss history because history and tradition are very important to the Swiss and it’s very important that you can show them that you understand that the Swiss context is special.

My second piece of advice would be to have some patience. Take your time and don’t rush into things.

Will you be sorry to leave?

I’m not looking forward to leaving. I’m very fortunate that I’m going to Paris (after a brief stint in Washington).

But Switzerland is a very special place. The only good news about leaving is that I’ll only be four hours away by train!