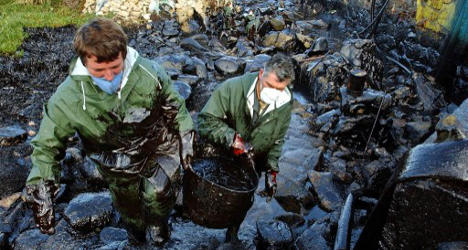 Volunteers work to clean-up oil spilled from the sunken tanker Prestige in November 2002 at the port of Camelle, in Spain's Galicia region. Photo: Christophe Simon/AFP

The Spanish court however sentenced the 78-year-old Greek captain of the Prestige oil tanker to nine months in prison for resisting attempts to tow the wreck away from shore before it spilled its load, killing tens of thousands of seabirds.

Eleven years to the day after the Prestige made its first distress call, the court ruled that neither Captain Apostolos Mangouras nor the Spanish maritime chief who ordered it out to sea were to blame for the vast oil slick that followed.

When it broke in two after six days damaged and adrift, the Prestige spilled 63,000 tonnes of fuel oil into the sea, coating beaches in Spain, France and Portugal with black gunk.

The disaster prompted 300,000 volunteers to come out to clean the beaches.

Judge Juan Luis Pia of the Galicia high court said Mangouras and Greek chief engineer Nikolaos Argyropoulos were not responsible for the sinking of the Prestige, which had been declared seaworthy despite having structural damage.

Despite being cleared of causing the wreck, Mangouras was sentenced to nine months' imprisonment on a charge of refusing an order to be towed out to sea as Spanish officials tried to lessen the potential environmental damage.

Due to his age Mangouras will not go behind bars.

He and "the crew of the Prestige should be absolved" of the charges of environmental crimes since they did not act intentionally nor with serious negligence, Pia said in his ruling.

A fourth defendant, the ship's second officer Ireneo Maloto from the Philippines, is on the run.

The court also absolved Jose Luis Lopez-Sors, the head of the Spanish merchant navy at the time, saying his initial decision to order the ship away from Spanish shores had been correct.

The judge ruled that Lopez-Sors, "faced with an emergency and after a rigorous and capable technical assessment, made a decision that was debatable but partially effective, entirely logical and clearly prudent".

The ship listed to starboard in the storm due to a "structural fault" that was unknown to the crew, the ruling said.

During his trial Mangouras blamed the spill on the order to tow the ship out to sea after it sent a distress call due to a crack in its hull.

Along with lawyers representing Mare Shipping, the company that ran the Prestige, the captain said that order caused it to break up and spill its load.

"The ship was cracked and they sent it out into the ocean," Mangouras told the court in November 2012. "They sent us in a floating coffin… to drown."

The court heard months of testimony from more than 200 experts and witnesses in the trial that opened in October 2012.

Spain's current conservative Prime Minister Mariano Rajoy was deputy premier at the time of the spill and initially downplayed the gravity of the accident.

He repeatedly described the black spots that appeared in the sea where the tanker went down as "small threads of clay".

Environmental campaign group Greenpeace complained that the trial did "not include those who are really politically responsible, not the companies involved", in a statement ahead of the verdict.

"It is a sentence to wrap up the case and will not prevent another Prestige from being possible."