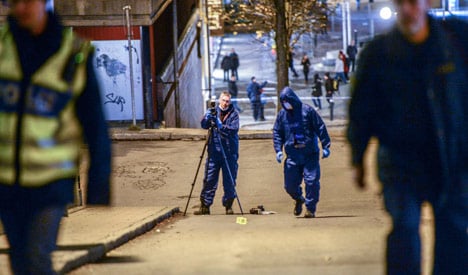 Forensic officers at the scene on Thursday. Photo: Fredrik Sandberg/TT

Police in the town less than an hour south of Stockholm received a call at 3.25pm on Thursday from a witness who had heard at least two gun shots. In a garage minutes from the police station, officers found a wounded man who was quickly taken to hospital by helicopter. Initial media reports stated the victim had been shot in the head. A gun with a silencer was found outside the parking garage.

"The wounded man is in the operating theatre," Södertälje police spokeswoman Lotta Thyni told The Local. "We do not know what condition he is in, and we will not comment his injuries."

Witnesses said the man was attacked in front of his son, who was taken to safety by an onlooker.

Nor would the police confirm the gun found on the scene, which was equipped with a silencer. Witnesses said they heard at least two shots, some many more. There were still forensic officers on the ground at 9pm, Thyni confirmed, while the local police continued to speak with witnesses and to coordinate information.

Local media reported that the victim was considered a potential target, due to an unspecified connection with the murders of Yacoub and Eddie Moussa in the Oasen community centre in 2010.

"We have opened an investigation into attempted murder," Thyni said. One person was arrested late on Thursday evening.

The 41-year-old victim had been charged in the massive court case against local organized criminals the Södertälje Network, local newspaper Länstidningen confirmed.

In August 2013, the suspected sergeant-at-arms of the local Södertälje Network gang, Bernard Khouri, was sentenced to life in prison for conspiracy to commit three murders – the Moussa brothers as well as Muhaned Ali, the friend and X-Team affiliate of younger Moussa brother Dany. The latter was arrested for drug possession at the scene of his brothers' killings, a move in part orchestrated by the police to keep him out of harm's way in case he was next on the assassins' hit list. Before being taken away, however, a distraught Dany threatened to kill a Khouri affiliate at the scene. The same person was later charged with extorting protection money from local businesses.

More than two years later, the district court verdict stated that the two feuding gangs – the Network and the Bandidos-affiliated X-Team – were attempting to control the gambling market in the town of 90,000, of which many are first and second-generation Christian migrants from the Middle East. Khouri is Syriac, whereas the Moussa family is Assyrian. Several other suspects were also jailed for crimes ranging from theft to extortion.

Many of the long list of suspects' defence attorneys as well as the prosecution have appealed the verdict – with Khouri's lawyer Fredrik Ungerfält telling The Local last week that the verdict was based on structural evidence "alone and in the absence of causal evidence".

"Khouri has been convicted of conspiracy to murder only because he was considered the leader of a criminal organization," Ungerfält wrote via email. "It's utterly wrong."

The entire court case will be reexamined by the appeals court later this month.