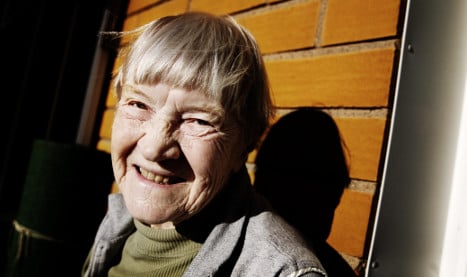 Segerson’s career has a rapper started in 2006 at a pensioner Christmas party.

"I used to sing at the pensioner parties; songs in Russian and German," Segerson tells The Local. "And I got so tired of it and said no. They kept bugging me and finally I said I could rap instead. And I was astonished when they said yes."

When Segerson, then a youthful 93, stepped onto the stage, all she could come up with was Jolly Bob, a ditty by Swedish singer and actor Lasse Dahlquist. The catchy song, partially set to the same tune as Yankee Doodle, was a hit when it was released in 1938 and tells the story of a happy sailor who had to dance a jig to win the hand of a beautiful barmaid.

Segerson’s rap interpretation of Jolly Bob was a hit on the pensioner party, and when she attended a birthday party shortly after she performed the same number.

"They had a fun programme, so I thought, why not?" Segerson recalls. "But the organizer of Gothenburg's Culture Days was at this party, and he asked me to rap there, too."

After that she became a Youtube success as well as a local celebrity, with people even asking her to rap on the bus. Each time Segerson performs, she raps to Jolly Bob. Truth be told, she actually likes to refer to herself as a Jolly Bobber rather than a rapper.

"Now I have rapped at the city library, the city theater, culture days, and the art museum. I have always said I’ll stop, but it’s easier to say ja, a word with two letters, than nej, a word with three," the 98-year-old jokes.

But Segerson, who turns 99 in December, is adamant about wrapping up the whole project now. On October 31st, she Jolly Bobbed for the last time at the Culture Festival in Gothenburg, accompanied by young DJ rappers Mattias "LM36" Jonsson and Jonathan "Mesk One" Lund.

"At the culture festival it was the idea that young and old would play and perform together, so there were these two boys with me," Segerson recalls. "But they rap so fast that you can’t hear a thing they say. So I told them, it’s great to be fast, but you have to let people hear the words, too. And we rapped together."

"She's so super funny. She's the most energy filled person at that age I've ever met. Being so positive about life, being so completely in the here and now, that was amazing. Truly amazing," he gushes, adding that he feels he "made a friend" through rapping with the 98-year-old.

"After rehearsal we went to her place, and she invited us to have coffee. We sat there for like three hours and she told stories," he says.

"Her life story is bloody amazing…She could write amazing rhymes. I'm going to push her to write her own stuff."

And while LM36 may not end up on stage again with Segerson, the trio’s performance was filmed, and Segerson says that anyone who wants to see her Jolly Bob can watch the recording instead.

"Yes, I’m done, but I’m on TV and computers now, so you can see me there, as lovely as I am," she jokes.  "When I rap to Jolly Bob, I dance, too, and my body doesn’t want to do that anymore. I won’t be singing at parties either, my voice is also 99 years old.

"I’m tired of it, no more standing on stage for me."

The world’s oldest rap veteran plans on taking it easy at home now, listening to classic Swedish composers like Lasse Dahlquist and Evert Taube – and rap, when it comes on.

SEE ALSO: A list of The Local's past Swedes of the Week