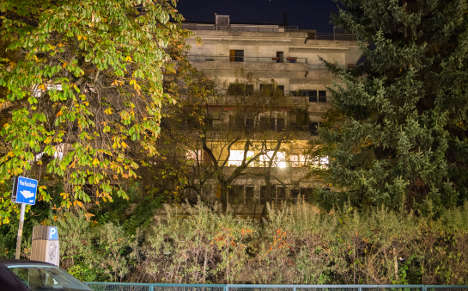 The Munich building where the art was found. Photo: DPA

"The last business and personal contacts between the Galerie Kornfeld and Cornelius Gurlitt go back to 1990," the gallery, based in the Swiss capital Bern, said in a statement.

It rejected German media reports that Gurlitt —  a recluse whose rubbish-strewn Munich apartment was found to contain almost 1,500 paintings — had been heading to the gallery when he was stopped by German customs authorities in September 2010.

Gurlitt, now 80, was caught on a train from Switzerland to the southern German city of Munich with a large amount of cash.

That led to a 2011 search of the apartment of Gurlitt — the son of the German art collector Hildebrand Gurlitt who bought up paintings in the 1930s and 1940s.

The Galerie Kornfeld said Monday that at a 1990 auction it had bought what was then 38,250 Swiss francs' worth (then $29,860) of artworks on paper whichhad been pulled from Nazi Germany's museums in 1937 after being deemed "degenerate".

Hildebrand Gurlitt had bought the artworks cheaply after 1938, it said, adding that the deals could "not be challenged".

"It is important to make a clear distinction between works that were looted and those seized by the National Socialists as 'degenerate art' which can be bought freely to this day," it said.

Until the Nazis took power in 1933, Gurlitt senior had been a well-known promoter of the kind of modernist art so hated by the Nazis, the gallery noted.

Despite having a Jewish grandmother, Gurlitt become indispensable to officials in the Third Reich because of his art expertise and vast network of contacts.

Hitler's propaganda minister Joseph Goebbels put him in charge of selling the art to buyers abroad.

However Gurlitt apparently secretly sold some of the works to Germans and hoarded the rest, later claiming that they were destroyed during a wartime bombing raid.

Cornelius Gurlitt, who did not have a job, had reportedly sold a few of the paintings over the years, living off the proceeds.

The Galerie Kornfeld noted that from 2006 onwards, when it sent him catalogues, they were returned stamped "refused" or "undeliverable".