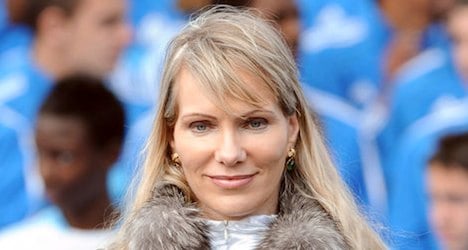 Hildebrand, 50, amicably separated from Kashya Hildebrand back in May, the French-language Swiss magazine said, citing unidentified people close to the couple in what it called an “exclusive” scoop.

This was around 17 months after the banker was forced to step down as head of the Swiss central bank over a currency trading scandal involving his wife, who was accused of making a 75,000-franc profit with inside information.

Hildebrand denied wrongdoing but resigned in early 2012 “to maintain the credibility of the SNB” before taking a London-based position as vice-chairman of BlackRock, the world’s largest asset manager.

Born and educated in Russia, she became Louis-Dreyfus’s second wife in 1992.

Said by Forbes magazine to be worth six billion euros, she is majority owner of the Olympique de Marseille football team.

L’Hebdo notes that Hildebrand and Louis-Dreyfus both have a strong attachment to Zurich.

It’s the city where Hildebrand spent much of his career with the SNB (which also has offices in Bern), while Louis-Dreyfus owns a home in an upscale municipality not far from the city on Lake Zurich.