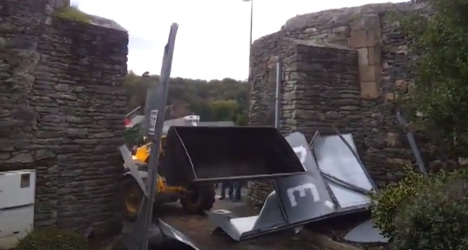 Angry protesting workers from Tilly-Sabco, one of France's largest poultry exporters, on Monday used a tractor to break down the gate of a local government building. Photo: Pierre Desouche/Youtube

A demonstration by workers protesting the decision of French chicken producer Tilly-Sabco to halt its exports went awry on Monday afternoon when one protester used a tractor to break down the front door of a local government building.

The angry demonstrators lit a fire in the courtyard, and have since occupied the building, according to French daily Le Parisien.

The demonstration, which took place on Monday afternoon between the Tilly-Sabco headquarters in Guerlesquin, in the Finistère department of western Brittany and local government offices in Morlaix, was attended by around 150 to 200 workers as well as poultry farmers.

At around 3:30pm a protester was captured on video commandeering a tractor parked outside the building to break down the front door, clearing the way for the protesters who then filled the courtyard, as seen in this photo tweeted by Stéphane Journot.

Tilly-Sabco announced on Saturday that from January onwards, it would halt all of its exports, which in 2012 represented 90 percent of the company's annual turnover, around €136 million, a decision which puts around one thousand jobs on the line.

The decision followed a decision made in Brussels on July 18th to stop financing frozen chicken exports.

Speaking at the protest on Monday, Tilly-Sabco’s CEO Daniel Sauvaget said that the company could no longer compete with other exporters without this vital financial aid.

“I hope that the [the French Minister of Agriculture Stéphane] Le Foll will protest before Friday. There are urgent matters, decisions to be made,” he said.