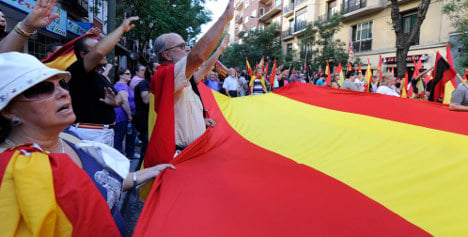 With a piercing blue gaze, Spain's National Alliance president Pedro Pablo Pena openly declares himself a fascist and neo-Nazi, part of a marginal movement that is trying to gain ground at a time of economic pain and national uncertainty.

Pena, watched by young party followers, outlines his ideology candidly: "Nation, race and socialism", words that are painted on the walls of his small Madrid headquarters next to the party's emblem, which has clear Nazi connotations.

It is still a marginal ideology in Spain with barely 0.3 percent of the vote going to the extreme right in the 2011 elections and a dozen councillors sprinkled in the city and town halls of the Madrid, Valencia and Catalonia regions.

But they are trying to take a stronger role as Spaniards suffer in a double-dip recession, corruption scandals batter the main parties and doubts emerge over the country's unity with many Catalans campaigning for their region's independence.

But unlike France and Greece, analysts largely rule out the dawn of a significant extreme right movement in Spain, where General Francisco Franco's long dictatorship, which ended with his death in 1975, remains a painful memory and immigration is widely accepted.

"I don't see movements or parties in Spain like those we are seeing in Europe that really have the capacity to destabilise the political system," said Fernando Vallespin, political science professor at the Autonomous University of Madrid.

In Spain, the ruling, right-leaning Popular Party, in power since scoring a landslide election win in 2011 over the country's other main political force, the Socialist Party, usually picks up such votes.

The Popular Party, a successor to the Popular Alliance founded in 1976 by former Franco minister Manuel Fraga, "has been able to incorporate social sectors that would have joined these movements", Vallespin said.

Such voters manage to feel comfortable with some of the Popular Party's ideology, he said.

Critics say the Popular Party has shown a lax attitude in the past months to Francoism, which it has never condemned.

On October 10, the Popular Party used its parliamentary majority to block a motion seeking to criminalise "defence or praise for Francoism, fascism, totalitarianism or Nazism".

The Popular Party said there was no need for such a law because a new criminal code being debated in parliament already punished hate speech or Holocaust denial.

Over the summer various photographs were published of leading young members of the Popular Party with fascist symbols.

The recent use of a public school in the Popular Party-controlled Madrid district of Quijorna to host a market selling Franco-era memorabilia also sparked widespread consternation.

Llamazares asked prosecutors to outlaw National Alliance after some of its members attacked a Catalan cultural centre in Madrid on Catalonia's national day, September 11.

Pena said the media focus on the attack actually raised National Alliance's profile, sending the number of telephone calls from people seeking to join surging from a dozen a month to more than 20 a day.

Along with other small extreme right parties grouped under the platform "Spain on the March", which was formed in July, the party organised a protest against Catalan independence in Barcelona on October 12, rallying some 400 neo-Nazis behind Franco-era flags and fascist-style symbols.

In Spain, extreme right movements won support not so much from a reaction against immigration  as a desire to recreate a Spanish nation unaffected by regional separatist movements, Vallespin said.

"What we aim to do is to regain a segment of the Spanish population that still believes in the virtues of the Spanish people: honesty, discipline, patriotism, religion, manliness. Traditional values," said Pena, a lawyer by profession who founded the party in 2006.

The strength of the economic crisis, which has driven the unemployment rate to 26.3 percent, and widespread corruption also give the extremists a foothold.

"The crisis can help us," admitted Pena, who has charged two members, Adriana Truchado and his 17-year-old cousin Andrea Martinez, with creating an aid programme for the needy similar to that launched by Golden Dawn in Greece.

In a room in Truchado's apartment in a working class district in northern Madrid, they stock up food, clothes, school material and even a crib and baby stroller.

The aid is distributed to unemployed families with children with one condition: they must be of Spanish origin.

"If our country helps outsiders, but not our own, that ends up creating these problems. In the end, we end up being neglected," Martinez said.