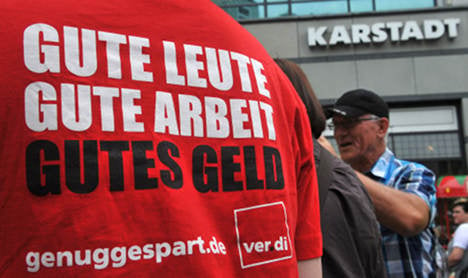 By striking, staff at Karstadt are sending out a clear message “to their employers to think about providing their workforce with a stable future,” a spokeswoman from Verdi union, which organized the strikes, told The Local on Friday morning.

Branches in northern and western Germany will be affected, but the exact number of staff taking part was not clear, she said. Strikes will, in some places, run to Saturday.

Founded in 1881, the department store has suffered financial woe in recent years. It has been embroiled in a fight over wages for its 20,000 employees since November 2012.

Verdi has been pushing for a contract to give staff job security, and to get the company to commit to a set wage tariff. Nearly a year later, there has been little progression.

There will be discussions over the coming weeks, Verdi said in a statement put out on Friday morning.

Almost all branches in Berlin will be affected, with a gathering outside the store on the Kurfurstendamm shopping street.

READ MORE: Thousands of jobs to go at Karstadt and RWE