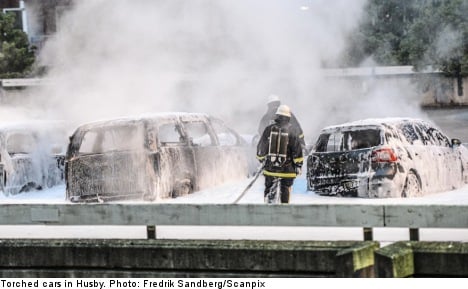 Deputy chief prosecutor Bengt Åsbäck decided that the initial manslaughter probe, which was closed down in August, was insufficient in determining whether a crime has been committed. A new probe will be launched as to whether the officer was guilty of professional misconduct.

The news was welcomed by Kerstin Koorti, the lawyer representing the dead man's wife.

"I am extremely relieved," she told the Dagens Nyheter newspaper (DN). "After having seen the reconstruction films from the crime scene, I was truly surprised that charges weren't filed."

The shooting occurred in May, when the 69-year-old was seen wielding a large knife on his balcony in the suburb.

READ ALSO: The Local editorial: "Stockholm is not burning"

Police stormed the apartment and one officer shot the man dead. Less than a week later, a week of unrest hit the suburb and saw young residents smashing windows, torching cars, and throwing stones at police officers and firefighters.

The Swedish police officer who fired the lethal shots is in his thirties and joined the police in 2008. He has from the start denied committing manslaughter, stating that he had used his weapon in self-defence.

Martin Marmgren, another officer who was on the scene when the 69-year-old was shot dead, took to his personal blog to slam his colleague's actions.

"The police must protect, help and put things right. In this case it was the opposite," he wrote.

The incident also caused an uproar at the time as police were accused of giving out false information, stating that the man died in hospital when it was later revealed that he had died on the scene. Residents saw a hearse remove the body in the middle of the night.

IN PICTURES: Word on the street – Husby