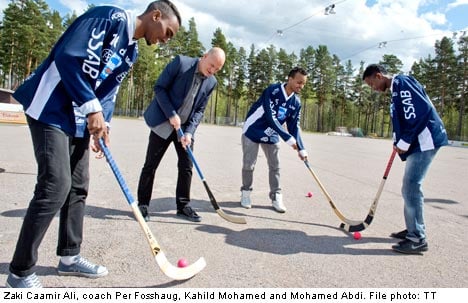 This is Sweden, but the players are Somalis. Hailing from a country that touches the Equator, they hope to shine in bandy, an ice hockey-type sport popular in countries blessed by the midnight sun.

IN PICTURES: Somali-Swedes pick up bandy clubs to beat Russians at own game

The Somali national bandy team has stood on ice only a handful of times before, but with the coaching of Swedish bandy pro Per Fosshaug, they have their sights set on the 2014 World Championships opening in late January in the Siberian city of Irkutsk.

“Soccer is easier,” said high school student Ahmed Hussein, smiling shyly when asked about their progress. “Everyone can play football, but ice-skating… It can be learned, of course, but it requires time and patience.”

Leaving war-torn Somalia as a refugee four years ago, the now 18-year-old never imagined life as a bandy player, even less that he would feature in a Swedish film. Today, both have come true for him.

Bandy, in which teams of 11 players reach extreme speeds on football pitch-sized ice fields, goes back more than a century, but it has caught on in only a handful of countries. The sport is dominated by A-group nations Sweden and Russia, relegating an ice hockey superpower like Canada to the B group.

It is in this second tier that the Somali players travelling to Irkutsk will vie with a number of nations ranging from Afghanistan to Argentina. As unlikely as the story of the Jamaican bobsleigh team at the 1988 Olympic winter games, the Somali bandy team’s trip to Siberia is now making it to the movies.

The popular Swedish TV duo Filip and Fredrik are preparing a feature-length documentary on the team to be released on Sweden’s national day, next June 6th.

It all started as an integration project, initiated by team manager Patrik Andersson early this year. He said he and his friends were out on a pub crawl when they began discussing how to work together on the challenges faced by Borlänge, an old industrial town 200 kilometres west of Stockholm.

Key among these challenges is the steady growth of the immigrant population, with the Somali community made up mostly of refugees now numbering 2,000 of a total population of 50,000.

Andersson, recounting how the idea of the bandy team gradually took form, said he thought creating bridges between coexisting cultures “would make Borlänge a good city to live in”.

The vision is whole-heartedly embraced, and partly financed, by the municipal government, which sees the immigrants as an asset that can help counterbalance the gradual ageing of the town’s population, according to municipal official Jan-Olof Lundberg.

“On the labour market, there won’t be enough labour, so it’s very good from that aspect,” he said.

On a parking lot in Tjärna Ängar, a residential area created under a 1960s national housing programme, Andersson is waiting to pick up a group of Somali bandy players in his white Toyota.

From the small lanes connecting the three-storey apartment blocks, players arrive on bikes or on foot, and Andersson and other volunteers drive them to the sports facilities in the town’s outskirts.

The hockey arena where they train until it is cold enough for outdoor ice has seen many players passing through since it opened in 1970 – part of the town’s long history with the sport.

Slightly behind schedule, the eager players, wearing colourful helmets, are ready for face-off. After a warm-up with exercises around rubber tires placed on the ice, it is time for the fun part, a leisurely game resulting in many tumbles and a 4-4 tie.

Bandy is the community’s sport, more so even than soccer, and the idea of being associated with the world’s first African bandy team has enthused the local team, which has helped provide equipment.

“Of course, the biggest challenge is to shape a team and make them bandy players. It will take time, for sure,” said Fosshaug, supervising the training session.

The problem is that with just over three months to go before Irkutsk, time is of the essence. But in any case, Fosshaug added hurriedly, winning “is not the only goal”.

A berth in the Irkutsk championships is already secured, as the Sweden-based Federation of International Bandy agreed to admit the Somali team based mainly on the recommendations of Fosshaug, one of the sport’s heavyweights who helped win gold for the Swedish team five times between 1993 and 2005.

With this unusual entree, the Somali team will become the first in bandy history to compete in the world championship without having been tested on the ice in a real match. The road to Irkutsk will be long, but they are all convinced they will succeed – because with this team, success will not be measured in medals alone.

“To get there is a fantastic achievement,” said Andersson. “We won’t need to score any goals. Just being there will do.”

Federal prosecutors said in a statement that the suspect, identified only as Ilnur N., had been taken into custody on Friday on suspicion of “working for a Russian secret service since early October 2020 at the latest”.

Ilnur N. was employed until the time of his arrest as a research assistant for a natural sciences and technology department at the unnamed German university.

German investigators believe he met at least three times with a member of Russian intelligence between October 2020 and this month. On two occasions he allegedly “passed on information from the university’s domain”.

He is suspected of accepting cash in exchange for his services.

German authorities searched his home and workplace in the course of the arrest.

The suspect appeared before a judge on Saturday who remanded him in custody.

Neither the German nor the Russian government made any immediate comment on the case.

However Moscow is at loggerheads with a number of Western capitals after a Russian troop build-up on Ukraine’s borders and a series of espionage scandals that have resulted in diplomatic expulsions.

Italy this month said it had created a national cybersecurity agency following warnings by Prime Minister Mario Draghi that Europe needed to
protect itself from Russian “interference”.

The move came after an Italian navy captain was caught red-handed by police while selling confidential military documents leaked from his computer to a Russian embassy official.

Several central and eastern European countries have expelled Russian diplomats in solidarity with Prague but Russia has branded accusations of its involvement as “absurd” and responded with tit-for-tat expulsions.

The latest espionage case also comes at a time of highly strained relations between Russia and Germany on a number of fronts including the ongoing detention of Kremlin critic Alexei Navalny, who received treatment in Berlin after a near-fatal poisoning.

Chancellor Angela Merkel’s government has moreover worked to maintain a sanctions regime over Moscow’s annexation of the Crimean peninsula, the scene of ongoing fighting between pro-Russia separatists and local forces.

And Germany has repeatedly accused Russia of cyberattacks on its soil.

German prosecutors in February filed espionage charges against a German man suspected of having passed the floor plans of parliament to Russian secret services in 2017.

Foreign Minister Heiko Maas last week said Germany was expecting to be the target of Russian disinformation in the run-up to its general election in September, calling it “completely unacceptable”.

Russia denies being behind such activities.

Despite international criticism, Berlin has forged ahead with plans to finish the Nord Stream 2 pipeline, set to double natural gas supplies from Russia to Germany.