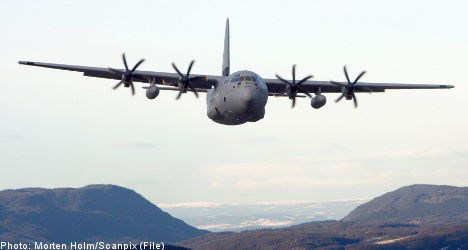 According to the Swedish Accident Investigation Authority (Statens Haverikommissionen, SHK), Swedish air traffic controllers let the plane fly too low and the Royal Norwegian Air Force was unable to handle the situation.

A combination of insufficient procedures and inexperience, rather than a technical failing or one specific person’s error, meant that the crew flying the plan never got any warning they were heading into the side of the Kebnekaise Massive.

“It’s not especially interesting who made a mistake. Everyone can make mistakes. What’s interesting for us is, how could this happen?” SHK head Hans Ytterberg told reporters on Tuesday.

“To summarize, there were failings and weaknesses among both the Norwegian and Swedish air forces.”

Two days later, wreckage, as well as body parts from the five deceased crew members, was found on the east and west sides of the Kebnekaise Massive at an altitude of more than 1,500 metres.

Investigators found that the Norwegian air force lacked procedures for planning and following up the flight, and also put too much faith in Swedish air traffic controllers.

As a result, the crew was never made aware that the information they received from air traffic controllers meant that they plane wasn’t maintaining sufficient distance from the ground.

Information from air traffic controllers also didn’t follow procedures because they “didn’t have enough experience and knowledge to be able to lead air traffic from the west into Kiruna airport in a safe way under prevailing conditions” the commission wrote.

Lead accident investigator Agne Widholm, who led the accident probe, said that an over-reliance on technical systems may have also played a role in the accident.

The fact that the area where the crash occurred isn’t covered by radar also complicated air traffic controllers’ work.

In looking into why the plane’s low-altitude warning system wasn’t activated, investigators found that the topography combined with the system’s settings at the time of the crash didn’t fulfill the criteria required to sound the alarm.

It wasn’t, SHK concluded, the result of a technical malfunction.

“All four crew members and one additional passenger died when the plane crashed into the mountain,” said Widholm.

The violent crash unleashed an avalanche which then buried much of the wreckage.

He added that both the Swedish and Norwegian investigators are in agreement about the findings of the report, which includes 22 recommendations for the Norwegian air force, the Swedish Transit Authority (Transportstyrelsen), the National Police Board (Rikspolisstyrelsen), and the Civil Contingencies Agency (Myndigheten för samhällsskydd och beredskap, MSB).

The recommendations are meant to help prevent a similar accident from occurring in the future and improve emergency services.