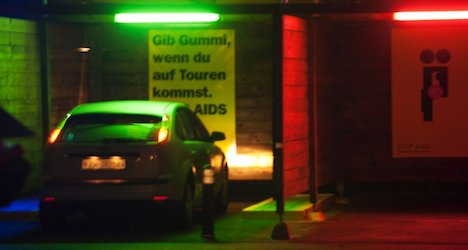 In a reader’s letter published on Tuesday by the Tages Anzeiger newspaper, Cornelia Zürrer Ritter, the Sally Ann’s director in the Swiss city, said the new regulations are putting street walkers in a precarious situation.

“A great number of these women are here completely legally,” Ritter said.

“They are properly registered as sex workers and pay their taxes,” she said.

“They should be able to work on the streets in Kreis 4,” Ritter added, referring to a neighbourhood between the Sihl River and the train tracks coming from the city’s main train station, where prostitutes have been banned.

Many social workers and members of religious group say the revised law on prostitution, introduced at the beginning of the year, is not working.

The city of Zurich set up “sex boxes”, drive-in areas where customers in cars can find the services of prostitutes, away from the city centre in a bid to deal with complaints from residents in the core.

But the sex boxes are widely considered to be a flop, attracting few customers and a dwindling number of prostitutes.

“Since street prostitution was banned in several zones, notably the Sihlquai, women have a lot of difficulty finding new places to work,” Christine Hauri, another Salvation Army official told the Blick newspaper.

Valentin Lanmann, a lawyer who specializes in prostitution issues, shares the concerns.

“The more prostitution is illegal the more dangerous it will be,” he is quoted as saying by 20 Minuten.

“Social workers are often in contact with these people,” Lanmann said.

“They know what they are talking about.”

Officials from the city of Zurich are declining to comment, saying it is necessary to wait a few more months before drawing any conclusions about the new law and the sex boxes, which first opened for business in August.