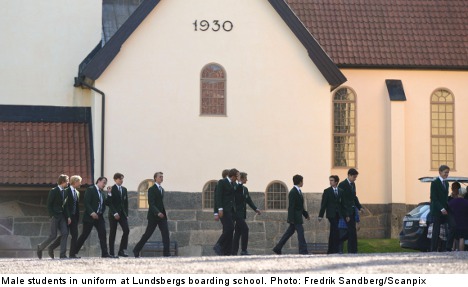 The school, which is the alma matter of Prince Carl Philip, was forced to close its doors temporarily in August following the hazing scandal. Two students were attacked and burned with a hot iron by a gang of nine other boys.

“There is no evidence that the students intended to harm anyone,” prosecutor Niclas Wargren told Sveriges Radio (SR).

The victims, aged 14 and 15 respectively, suffered burns as a result of the attack which was labelled by police as aggravated assault. Hospital treatment was required for the 14-year-old as his burns were so serious.

However, the prosecutor believes that it was a mistake that the iron was hot, refusing to comment further until the investigation is complete.

Following the incident Sweden’s School Inspectorate (Skolinspektionen) closed Lundsberg which prompted outrage from staff and pupils. It followed previous reports of bullying in the school.

In May last year, students at the school spoke out after being forced into oral sex and eating manure.

In 2011, a student had their nipples burned with an electric fly swatter.

Principal Staffan Hörnberg was sacked in the wake of the hazing scandal. The prestigious school reopened in early September and the decision to close it in the first place was criticized by an administrative court (förvaltningsrätten).

Although the pupils have been cleared of the assault charge they may be prosecuted for other offences such as illegal threats and molestation.