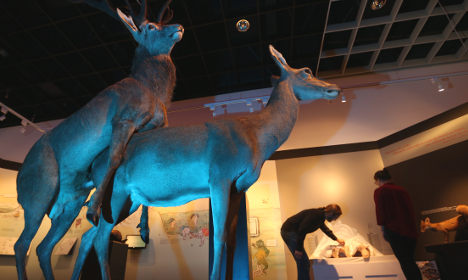 The exhibition at the LWL Museum of Natural History in Münster explores how sex in the animal and plant kingdoms plays the starring role in evolution.

Highlights of the 450 items on display include foxes, dolphins and hedgehogs in sex positions.

It also takes a close look at homosexuality in the animal kingdom, and the sex drive of dolphins.

CLICK HERE for photos of the gallery (Explicit Warning)

Dr Jan Ole Kriegs, who is behind the exhibition, said: “Sex is an expensive luxury for nature, taking up a lot of energy, but it also provides the greatest genetic diversity.” Bacteria, for example, reproduce asexually and therefore have failed to evolve.

Kriegs said the exhibition also explores the quirks of reproduction – such as wild turkeys who can lay eggs from which males hatch without the egg being fertilized. “We have no idea why that happens,” Kriegs said.

The exhibition looks at the reproductive parallels and differences between humans, animals and plants and includes photos of a model wearing men’s, and then women’s clothes. Biologist Lisa Klepfer, who set up the exhibition with Kriegs, said it showed how clothes can disguise our gender.

Designed with students from Münster College, it also includes models of Neanderthals which were painstakingly put together by artist Lisa Büscher.

Kriegs described the two Neanderthal models as “not thoroughly unattractive.”

There are half a million hairs in each of the two figures. They have been included in the exhibition as the first humans coming out of Africa reproduced with Neanderthals.

Kriegs said that four percent of the DNA of central Europeans was from Neanderthals.

The exhibition opens on Friday and runs until October Saturday 19th. See pictures from it here (Explicit Warning).