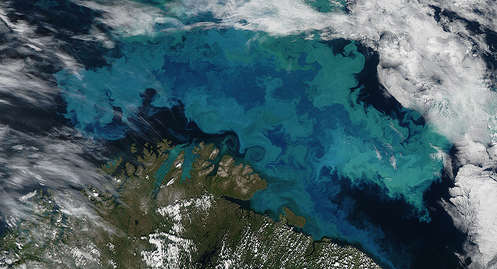 Barents Sea - Nasa Goddard Space Institute
"The Barents sea is warmer now than it has been for a very very long time, so of course its a signal of global warming," Randi Ingvaldsen, director of the institute's climate programme told The Local.
"The last decade has been the warmest ever, and this year is the warmest this decade, at least for the southern part of the Barents Sea".
The report, which is expected to be published in a couple of weeks, takes 'normal' as the average surface temperature in the sea between 1929 and 2007.
Ingvaldsen said she expected the high temperatures, which follow an unusually hot summer in northern Norway, to be a boon for fish stocks.
"The Barents Sea is important for fish, so warmer conditions, especially in the eastern Barents Sea, will be good for fish stocks. The most commercial species are cod, capelin, but also herring, which use the barents as a nursery area, and then they come back the Norwegian sea."
The Barents Sea extends from Novaya Zemlya and Franz Josef Land in Russia to Norway's Svalbard archipelago.