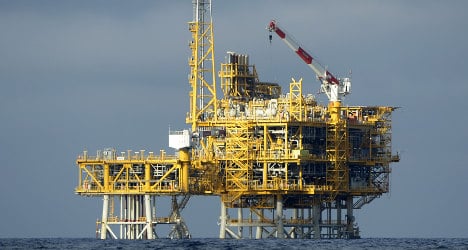 Photo: Lluis Gene/AFP
The government's comments come after earlier statements by green groups and geologists that the plant had caused the earthquakes.
Over 300 earthquakes have struck the Gulf of Valencia, a zone not normally known for seismic activity, over the past month, according to Spain's National Geographic Institute. The quakes have not caused any damage but have frightened residents.
The strongest, a 4.2 magnitude earthquake, hit in the early hours of Tuesday.
Inmaculada Ramirez, a shop owner in the coastal town of Vinaros which faces the offshore gas storage plant, said she was woken up by that earthquake.

"The windows shook as if a train was flying overhead or a very long train was passing by," the 55-year-old told news agency AFP by telephone.

"The fact is that in the area of the fault line there exists accumulated energy that, pushed by the gas injections, ends up being released," he added.

"It is very unlikely that there will be earthquakes of a stronger magnitude," Suarez said.

Three other underground gas storage plants exists in Spain — in Huesca at the foot of the Pyrenees Mountains, in Guadalajara in central Spain, and in Bermeo in the Basque Country.

No seismic activity has been recorded near those plants.