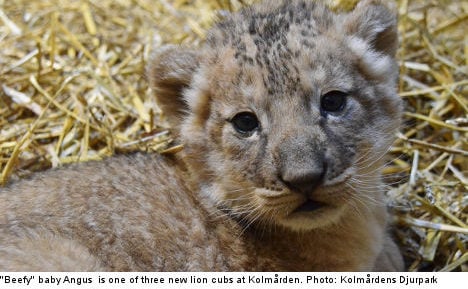 One female and two male cubs were born in mid-September, and the triplets have been dubbed Alice, Anton and Angus.

“We chose the names ourselves,” Cecilia Håkansson, caretaker at central Sweden’s Kolmården animal park told The Local. “We all wrote down the names we liked on notes on the walls, and tried to choose the best names.”

Anton and Alice are rather common Swedish names, but Angus is a bit of an oddball. His name is more commonly used to describe a breed of cattle or a popular hamburger meat and Håkansson said it was simply the most appropriate name for the cub.

IN PICTURES: See more of the lion cubs

“He’s really beefy,” Håkansson said with a laugh. “He’s the biggest of all of them, a whole half kilogramme bigger than the others.”

The cubs are African lions, a common class of lion which is not quite endangered, but classified as vulnerable. African lion cubs are no rarity, Håkansson said, but that doesn’t make them any less adorable.

“They’re all so cute. Little Alice is a bit shy right now, but she’s getting a little bolder. And Angus… They really are just like big kittens. Four-kilo kittens.”

When a mother lion is ready to give birth she leaves the rest of the pride. She gives birth and raises the cubs on her own for ten weeks before introducing them to the rest of the lions. Håkansson said the introductions can be tough, and the park has lost cubs in the past.

“Of course we have to help. There’s a lot that can go wrong and we’ve learned a lot. But there’s still not much we can do… basically we can use a hose to spray the other lions if something goes wrong.”

The introduction process will start in a few weeks, but until then the caretakers go in and handle the cubs for a few hours each day.

“They need to learn that humans are safe,” Håkansson told The Local. “So we can classify, train and feed them. Eventually they should even be able to come when we call.”