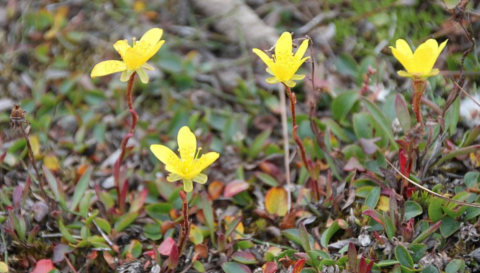 Saxifraga Hirculus - Erlend Bjørtvedt
Christin Jensen, a biology professor at Stavanger University, found the patch of Saxifraga Hirculus, called Myrsildre in Norwegian, in the village of Melsvik, when carrying out an environmental survey for the project.
"Myrsildre is a red-listed species that is seeing a rapid decline in the Nordic countries," she wrote in a letter to the Environment Department of Finnmark County, warning them of the importance of the plant.
Kåre Furstrand, project leader on the new section of the E6 road with Norwegian Public Roads Administration (NPRA), warned that any diversion would be expensive.
"For two years we have studied different routes, and we have found an alternative that is very good for us," he told The Local. "It would be a very high cost to change, because you would have to build a tunnel which is longer than the solution today."
He said NPRA was discussing the case with the local Alta county council, and would send an official report to Norway's Environment Ministry.
"We haven't started the road yet, but we hope that we can start next month," he said.