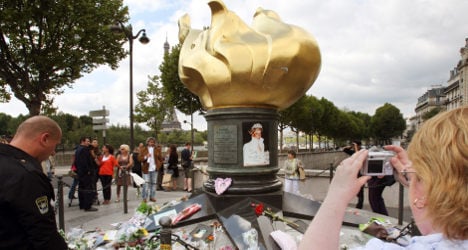 A handful of Diana fans gather 31 August 2007 at the Paris site where the princess's car crashed. Photo: Patrick Kovaric/AFP

Distributor Le Pacte told AFP it had the poster for "Diana" removed from near the entrance to the Pont de l'Alma tunnel on Monday, ahead of the film's French premiere on Wednesday.

"We asked for the removal of this poster after controversy in the British media," a source at Le Pacte said, adding that the poster was only one of about 1,000 put up in Paris to promote the film.

Diana, her boyfriend Dodi Fayed and their driver were killed after their car smashed into a pillar in the Pont de l'Alma tunnel while being pursued by photographers.

Several British newspapers criticised French promoters for putting up the poster at the site, with the Daily Mail quoting a friend of the princess, Rosa Monckton, blasting the move as "despicable and crass".

The Daily Star described the placement of the poster as "Di-abolical" and "heartless".

Since Diana's death, the area around the Pont de l'Alma has become an unofficial monument to the princess, with messages by her admirers scrawled on the bridge over the tunnel. 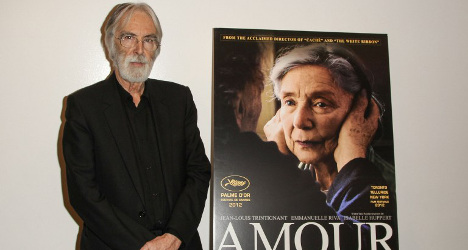 The 71-year-old's latest film "Amour", about a couple trying to come to terms with sickness and old age, won the Oscar for best foreign movie in February after winning the Palme d'Or at the Cannes Film Festival last year.

"When I make a movie, I want people to feel emotions and if I achieve this I am happy," he told reporters in Madrid in February during the presentation of another project, his staging of Mozart opera "Cosi Fan Tutte".

They play a loving, elderly Parisian couple. When Anne, played by Riva, has a stroke, her husband is left to care for her.

The prize is awarded each year to a person, group or institution whose work in cinema, dance, music or other forms of art "constitute a significant contribution to mankind's cultural heritage."

The Prince of Asturias awards are also given in the fields of communication and humanities, scientific and technical research, social science, letters, international cooperation, international understanding and sport.

Named after Crown Prince Felipe of Spain, the prizes are presented in the northern Spanish city of Oviedo, capital of the northern Asturias region, in a glittering ceremony broadcast live on Spanish television in October.