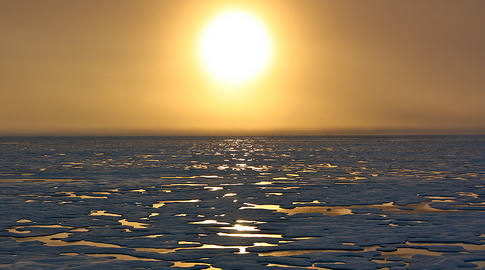 On August 27, 2012, the ice cover on the Arctic Ocean was the smallest ever recorded -- NASA Goddard Institute
No fewer than eight scientists from Cicero, based in Oslo, contributed to the report, two as lead authors, and one as a chapter editor.
"Norway is a front-runner on climate research," Christian Bjørnæs, Cicero's press spokesman told The Local.  "In Norway, meteorological science and polar science are both very advanced. Secondly we have funding, so we can actually have our scientists working on the IPCC. If you compare the contribution from Cicero to other European institutions, we're very high up on the list."
A summary of the IPCC report, published on Friday, concludes that it is now "unequivocal" that human activity is warming the atmosphere and warns that warming is likely to cross a critical threshold of two degrees centigrade by the end of this century, even if the amount of CO2 released into the atmosphere is rapidly curbed.
Gunnar Myhre, a senior research fellow at Cicero, edited the chapter on anthropogenic and natural radiative forcing, which concluded that human activity had increased the rate at which the atmosphere absorbed heat by 43 percent.
"We are quite satisfied with the chapter and we contributed to one of the ten figures of the summary for policy makers," he said.
He added that Cicero has also made "a quite important contribution on aerosols and how they scatter and absorb radiation."