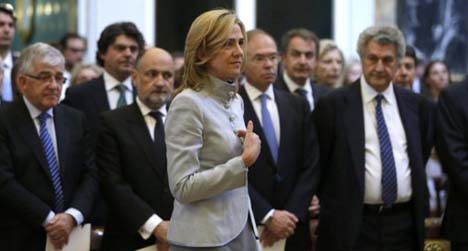 The Princess has moved to Switzerland with her children while her husband remains in Spain to face corruption charges. Photo: Juan Carlos Hidalgo/AFP

El Confidential reported on Friday that the Princess’s gross starting salary in 2004 was €83,000 ($112,000) a year but that for her current role as Director of Fundación La Caixa’s Social Area, which she currently carries out from Switzerland, she is paid €238,000.

Princess Cristina, the youngest daughter of Spain's King Juan Carlos, has been embroiled in investigations into allegations of corruption involving the Noos Foundation, which was run by her husband, Iñaki Urdangarin.

He was accused of misuse of €6 million in public funds.

In late July it was announced that the Princess and her four children would move from Barcelona to Geneva while Urdangarin remained pending the judicial proceedings against him.

A La Caixa spokesman told the newspaper that all directors’ salaries had been frozen since 2010 but that Cristina had received a small salary increase of 0.4% over the last three years.

The spokesman denied rumours that La Caixa was paying for the accommodation and school fees of the Princess and her family, amounting to some €200,000 per year.

Education at the prestigious Ecolint in Geneva for the four children costs €120,000 per year, which must be covered by the Princess and her husband, while rental of their penthouse in upmarket Florissant is estimated at €60,000 per year.

The €300,000 cost of security for the family in Geneva is covered by Spanish taxpayers.

A court hearing in the Balearic Islands in May suspended its investigation into the Princess’s role in the Noos case, but left the door open for further investigations into alleged tax fraud and money laundering.

The court’s statement warned that the daughter of the King "Should have known or been aware that Aizoon was a shell company and that her husband used it to defraud the Treasury."

It concluded that Princess Cristina "could have convened a board meeting to revoke her husband’s power or asked that the tax situation be regularised, but she did not."