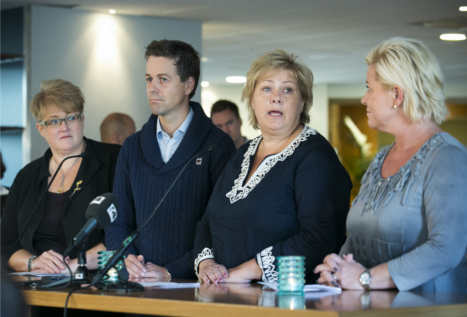 Party leaders from left to right: Trine Skei Grande, Knut Arild Hareide, Erna Solberg, Siv Jensen - Heiko Junge / Scanpix NTB
Knut Arild Hareide, the party's leader, is meeting with the party's national board today to decide on whether to enter government as part of a four party coalition with Conservatives,  Progress and the Liberal Party.
According to VG's sources, most of the board, including Hareide himself, are leaning towards rejecting a deal.
The party's doubts have intensified after Progress's Oslo head Christian Tybring-Gjedde last week argued once again that Norwegian culture and values faced an existential threat from Islamic immigration and defended the use of the term "creeping islamization".
Party leaders worry that Progress's leader Siv Jensen did nothing to distance herself from Tybring-Gjedde and his views, and fear that they risk being in a similar position if they join government with Progress.
"It was a clear demonstration of how a coalition would be," a party source told VG. "We simply will not put ourselves in a position where we have to sit quiet when this group of Progress politicians make their most controversial moves."
"Over a period of four years in government with Progress, there will be initiatives that will rub off on us," the source added.
VG believes that a prospective government deal over immigration would see the Christian Democrats win a one-off amnesty for children of immigrants who have had their asylum claims rejected in return for agreeing to a major tightening of immigration policy.