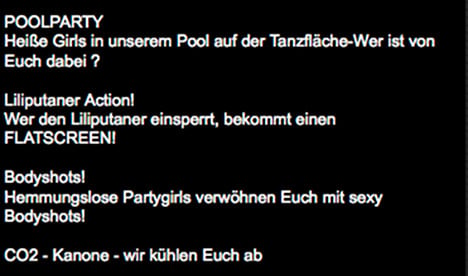 Janssen’s Tanzpalast in Cuxhaven, on the North Sea coast, is known in the area for its themed club nights. On Saturday, owners organised a “Lilliputian Action” night. “Catch the Lilliputian and win a flatscreen,” the website read.

This was exactly how it panned out, Der Spiegel news magazine reported on Tuesday. The family-run club hired a person with dwarfism for party-goers to catch in a bizarre game of tag.

Yet on Saturday evening, the dwarf antics in the Tanzpalast took a nasty turn – before the game of “catch” had even begun. A 42-year-old dwarf was taking part in a dance performance in the club, when he fell off a podium.

Cuxhaven police confirmed to Der Spiegel that he was taken to hospital with serious injuries. Spokeswoman Anke Rieken stressed that the man was not injured as a result of the “Liliputian Action” game.

According to the magazine, Janssen’s has been open in Cuxhaven since the 1970s. No-one in the club was available to comment on the evening, or on the fact that “Lilliputian” is a politically-incorrect term.