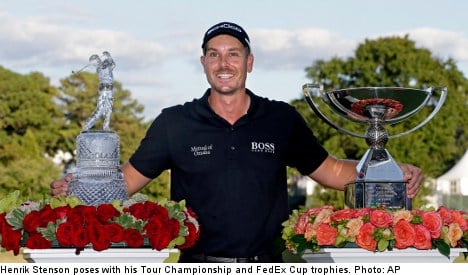 Stenson finished with a 13-under 267 overall score to beat Jordan Spieth by three strokes at the East Lake course, giving him the Tour Championship and its $1.4 million payout, along with the FedEx Cup title with its $10 million prize.

“To win both these trophies today it feels incredible,” Stenson said.

Stenson became the first European to win both the FedEx Cup and The Tour Championship.

“I hasn’t sunk in yet,” he said. “But this is going to feel better as week goes on.”

“Ever since Scottish Open it has been an incredible run,” he said. “It was a tough day out there today and I am really satisfied with the way I hung in there.

“I didn’t feel that confident with my game today. I had to battle it a little bit. I had to fight hard mentally.”

Stenson has a half dozen top-three finishes, a share of 33rd and a tie for 43rd at The Barclays since the Scottish Open.

Two years ago Stenson was outside the top 200 in the world and now he will move to the number four position.

“It shows one should never give up and keep on trying harder. I managed to come back from some bad slumps twice,” he said.

Spieth shot a six-under 64 for the second-top score Sunday. That moved him into second place at minus-10 and he was joined there by Steve Stricker, who fired with a 65.

Webb Simpson had the low round of the day, a seven-under 63, which helped him take fourth place at nine-under-par 271.

Dustin Johnson birdied three of the last four holes. He managed a one-under 69 to end in fifth at minus-eight. Johnson would have claimed even more prize money had he not stumbled to a triple bogey at the 17th hole.

Reigning US Open champ Justin Rose posted a three-under 67 to end in sixth at minus-seven. Zach Johnson and Billy Horschel both closed with 68s to share seventh at six-under 274.

Spieth rolled in eight birdies and had two bogeys Sunday. He posted four straight birdies on the back nine, beginning on the par-four 13th.

Spieth ended his rookie season the PGA Tour with one victory and nine top ten finishes.

“I just wanted another good round on Sunday,” said Spieth, who at 20 is the youngest player to have reached The Tour Championship. “I really wanted to play smart golf today and once the putts started falling I thought maybe I have a shot at it.

“My stroke felt really good on back nine today when I was feeling the pressure.”

The world number one Woods carded a three-under 67 and shared 22nd at even-par 280.

Woods entered the PGA Tour season finale atop the FedEx Cup standings, but rounds of 73-71-69-67 took him out of the running at The Tour Championship and left him as the runner-up in the FedEx playoffs.

Woods was left to ponder his fifth consecutive season without a major championship title.

“[I’m] very satisfied,” he said. “I had a number of chances to win some tournaments. I won five, which is, I think, a pretty good year. I’ve done that a few times over the course of my career.

“I wish I would have been a little more consistent in some of the events, but overall, at the end of the day, you know, to add to the win total for the year, it’s always a good thing.”