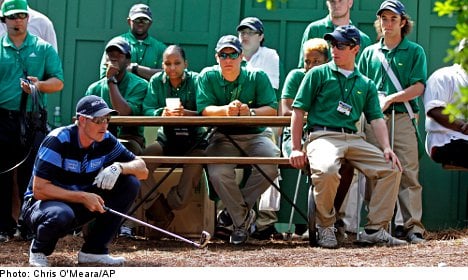 Stenson, playing with one club under the limit, fired a four-under-par 66 in the second round to finish 36 holes on 10-under 130 with reigning Masters champion Adam Scott next on 134. The Australian has started the day only one stroke adrift of Stenson.

Both players are among the five who can capture the $10 million playoff bonus prize with a victory in the $8 million tournament.

American Jordan Spieth, who has been a tour player for barely two months, was third on 135 with US Open champion Justin Rose of England and Americans

Billy Horschel and Dustin Johnson on 136.

World number one Woods, a 14-time major winner seeking his third playoff crown who could also win the bonus by winning the title, made a charge at the lead but a nightmare finish dropped him 14 shots off the pace after 36 holes.

After the round, Stenson said that he played the second round with only 13

clubs, one shy of the limit after damaging his 4-wood on the practice range.

“The face caved in on my 4-wood on the range, so I put it in the locker and played with 13 clubs,” Stenson said.

Stenson said he would try to have a new 4-wood in time for a morning start to Saturday’s third round, moved earlier because of expected storms in the afternoon.

But he also admitted, “The safest play might be to try to get the job done

Had Stenson carried the non-conforming club, he would have had to accept a

two-stroke penalty. Had he used such a club, he would have been disqualified.

Fortunately for the Swede, making his Tour Championship debut, he did neither.

Stenson opened with two birdies, added another at the third and closed the front nine with another. He began the back nine with his lone bogey of the round but pulled back a stroke with a birdie at the 16th hole.

Scott opened with a bogey, took another at the fourth after a birdie on the third hole, but matched Stenson with birdies at the ninth and 16th holes.

Woods opened Thursday with a 73 to stand next-to-last in the field of 30, the worst start for a top seed in the seven-year PGA playoff history, and he ended a birdie drought with his first of the event at the third hole.

“It was nice to finally make a birdie after 21 holes,” Woods said. “I missed everything on the high side. The greens were much slower than I thought

“Today they were quicker starting out. I took that into account. I got on lower lines. It ended up working. I made some putts. Hopefully in the next couple of days I can shoot some good rounds.”

Woods closed the front nine with back-to-back birdies and had two more at 12 and 13 to pull within four strokes of the lead, but took a double bogey at the 14th, a bogey at the 16th and a triple bogey at the 17th when he found water off the tee, a collapse to a one-over 71 he blamed on fatigue.

“I put everything I had into that start. Didn’t have much at the end. I just ran out of gas,” Woods said.

“I’m tired. It has been just a long grind. Duff (PGA Championship winner Jason Dufner) and I were talking about it. We’re all looking forward to that week off. Everybody out here has some little injury.

“I’m still in contention. You never know. You have got to keep plugging along. This is not a sprint. It’s four rounds of golf. It’s a marathon.”