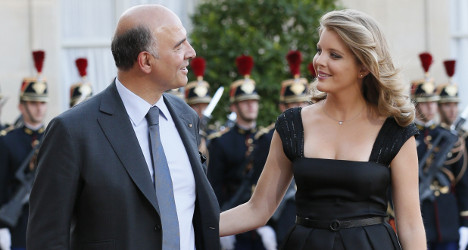 Why has she been in the news this week?

On Wednesday she caused a stir by taking to Twitter, as she often does, to reveal details about France’s pre-budget announcement. She was accused of stealing her boyfriend’s thunder.

Well, Pacquot has entered the consciousness of the French public in the last year or so.

A pretty, playful but enigmatic presence in interviews and on social networks, the underlying question behind the tone of most French media coverage of her is, “What is she doing with him?”

Moscovici, as well as being 30 years her senior (he will be 56 next week), has something of a reputation as the most boring man in French politics.

His career trajectory has been fairly standard, if suitably impressive by most people’s standards: a degree in economics and philosophy, graduate of ENA – France’s training ground for senior politicians and bureaucrats – some time spent in Brussels, and now the unglamorous, though high-profile finance ministry.

Pacquot, however, has shed light on the unlikely couple’s private life, and – whether strategically or inadvertently – boosted Moscovici’s previously rather austere reputation, talking sweetly about her balding boyfriend in interviews, and tweeting pictures of him sitting at home with the pair’s much-adored cat Hamlet.

“We have a normal life, going out to restaurants in the evening, or watching old Westerns on DVD, with Hamlet on our knees,” she told local paper Le Pays.

A Twitter pic of Moscovici and Hamlet shows the 'normal life' Pacquot tries to portray in public.

Where did she come from?

She’s originally from Montbeliard, in eastern France, and was still a undergraduate philosophy student in Besançon when she first met Moscovici at a football match, back in 2008.

“We felt very close to one another right away,” she told Le Pays.

“I had in front of me someone straightforward and honest. Together, we could talk about books all night. He helped me discover Flaubert,” she said, in terms that only in France could be considered folksy and down-to-earth.

The two have been together since then, only publically “coming out” in 2012, after having sued French gossip magazine ‘Voici’ in 2011 for printing holiday snaps of them.

In the meantime, Pacquot has picked up Masters degrees in public affairs and philosophy from the prestigious Sciences Po university in Paris, where she is currently studying for a PhD in philosophy.

Interestingly, her Master’s dissertation was entitled “The democratic problem of popular participation in public affairs – a question of competence?”

Pacquot, seen here with her cat Hamlet, 'happy to get back to the books' after her summer holidays.

Is she sincere? Or is this all PR?

It’s impossible to know. Pacquot has certainly added colour to her boyfriend’s grey public image, and helped to increase his popularity in France.

And in a time of economic crisis and austerity measures from the Socialist government of President François Hollande, the minister of finance can always do with any boost to his image that he can get.

After Moscovici was accused in April of being aware or complicit with the tax fraud of disgraced Budget Minister Jérôme Cahuzac, Pacquot was on hand to show the human face of that calumny.

“People can’t imagine, very few people see the man behind the politician, and he was really hurt [by the claims],” she told Le Journal Du Dimanche.

All the same, Pacquot does seem to enjoy toying with her public persona, bantering with Twitter users and making cryptic and enticing statements like: “I show [the public] a little of myself, just to prove that there’s nothing to see.”

Ultimately, however, it might just be that the bookish, bright and beautiful 26-year-old has found happiness with a “sensitive, simple and honest” older man, who just happens to be at the helm of the Eurozone's second-largest economy.