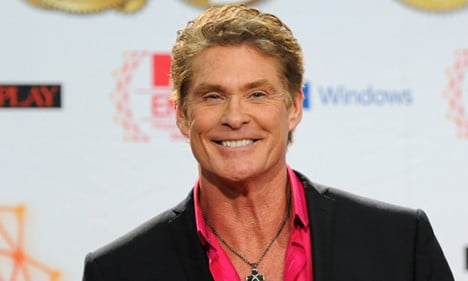 Tabloids the Bild and BZ both claimed that Hasselhoff would be shacking up in the BB container in Berlin.

Bild said that the former Knight Rider (1982–1986) and Baywatch (1989–2001) star would be joined by a host of C-list German celebrities and a token section of the Berlin wall – in homage to his close connection to the city´s infamous east-west barrier.

Hasselhoff famously claimed he had contributed to the collapse of the Berlin Wall with his song Looking for Freedom which was a hit in Germany weeks before the wall fell in 1989.

Although BB broadcaster Sat.1 did not deny the rumours, they were also not willing to confirm them. “We are really excited by all the wild speculation,” a spokeswoman told The Local on Thursday.

Sixty one-year-old Hasselhoff has been rather dismissive of his future housemates, asking the Bild, “who the f*** are these people?”

They look to be Lucy Diakovska, 37, from the former German girl band No Angels; Dutch TV presenter Marijke Amado, 59, and Martin Semmelrogge, the 57-year-old star of film Das Boot who was locked up last year for driving without a license.

Hasselhoff is no stranger to Germany and his links to the country have been much documented – especially by himself.

In March he told the Guardian: “I didn’t realize the significance of Looking for Freedom in east Germany until a few months ago. On my last tour there were thousands of Germans holding up signs saying ‘We love you, thank you for Mauerfall [the fall of the wall].”

Hasselhoff’s hit single Looking for Freedom topped the German charts for 8 weeks in 1989, the year the wall came down, and he performed at a New Year’s Eve concert on top of wall’s remains a few weeks later.

More recently he was central to protests against the removal of a section of the wall known as the East Side Gallery.

Disappointingly contestants will only be allowed alcohol in moderation, however this is probably for the best given David´s previous exploits. In 2007 the Hoff famously crawled through his Las Vegas hotel room, cheeseburger in hand.

The Big Brother house includes a pool, whirlpool, bar and a beach.