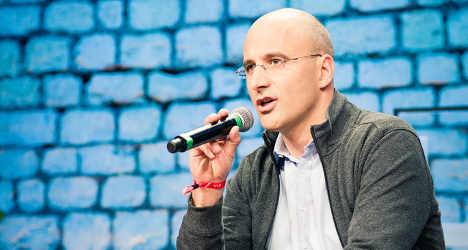 Riccardo Zacconi is co-founder of the company which came up with Candy Crush Saga. Photo: Official LeWeb Photos/Flickr

Who is Riccardo Zacconi?

Why is he in the news?

This week Zacconi was named one of the most powerful people in UK media by the Guardian newspaper, which crowned him as “the poster boy for the European gaming industry”.

The description is modest, as the Italian’s work is known across the world – even in Antarctica.

Yes, really. Candy Crush Saga boasts more than 50 million active monthly users, some of whom are simply passing the time on the icy continent. The game is free, but players can pay more for extra lives.

The premise of finding matching sweets to gain points has been a global sensation, with Candy Crush Saga now being the number one game on Facebook.

But Zacconi is not putting all his sweets in one jar. Of Facebook’s top five apps, three are owned by King, the other two being TripAdvisor and music player Spotify.

What’s the key to his success?

Zacconi has developed what he describes as the “minimum common denominator”, or the precise number of seconds people have time to play a game.

“You don’t need to dedicate hours to be able to play the game,” Zacconi told the UK's Independent newspaper.

Each Candy Crush Saga level takes just three minutes; about the time it takes for a barista to whip up a cappuccino and pick out the perfect cornetto.

How did he come to create such a game?

Unlike most of the online elite – Facebook Founder Mark Zuckerberg is still twentysomething – Zacconi has a couple of decades in the industry behind him. The 46-year-old has led an international career, including playing marketing cupid for online dating site Match.com and working for Swedish internet company, Spray Network.

How Italian is Zacconi?

Although Zacconi is Italian by nationality and studied at Rome’s prestigious LUISS University, his life now is distinctly global.

King has its headquarters in London, where Zacconi lives with his Chinese-Swedish wife and their son.

He has also opened up offices across Europe, from Stockholm to Malta, although unfortunately for his countrymen there are none in Italy. A necessity for any internet company, King also has an office in tech hub California.

What will he do next?

Zacconi has his eyes on Asia. By February this year there were already one million daily players of Candy Crush Saga in Hong Kong alone, prompting Zacconi and his King colleagues to expand the game’s reach to Japan and Korea.

“The company is growing explosively. We are continuously reforecasting upwards,” he told the UK's Telegraph earlier this year.