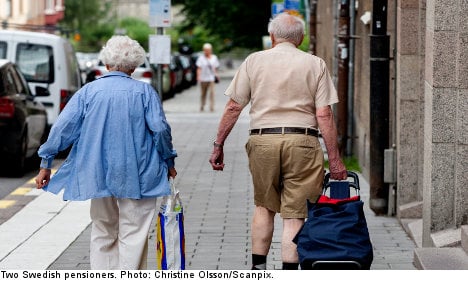 “This is going to mean a lot to many pensioners,” Social Affairs Minister Göran Hägglund told the TT news agency.

The tax reduction will leave every pensioner over 65 with at least 100 kronor more to spend each month starting on January 1st, 2014.

The cuts will come though raising the minimum tax deduction for pensioners, providing the greatest level tax relief to those with lower incomes.

The government estimates a single pensioner with a fixed income will end up with about 1,000 kronor more in disposable income in 2014 compared to 2013.

The tax relief measure unveiled on Monday is 1.35 billion kronor higher than figures previously discussed by the Alliance governing coalition.

“It’s going to mean a lot to a lot of pensioners. We know that many live at a very low income level, especially women who are getting on in years.”

The opposition was quick to pounce on the measure, however, with Social Democrat economic policy spokeswoman Magdalena Andersson accusing the government of using tax policy to exacerbate divisions in society.

“The problem is that, despite raising this tax reduction, the government’s tax policy as a whole worsens inequality when it comes to how pensioners and wage earners are taxed,” she told TT, pointing to a fifth round of tax cuts for wage earners expected to be put forward by the government.

SEE ALSO: Get the latest exchange rates and transfer money on The Local’s Currency page

In contrast, the Social Democrats want to do away with the difference in pensioners’ and wage earners’ taxed bills, a goal that is expected to be costly and one on which Andersson refused to comment.

Meanwhile, the head of Sweden’s National Pensioners’ Organization (Pensionärernas Riksorganisation, PRO) welcomed the tax relief directed toward its members, but cautioned his group was far from satisfied.

“We won’t be happy until the gap between the taxes on pensions and the taxes on wages is gone,” Curt Persson told TT.

If you’re planning on leaving Sweden for more than a year, you will have to let the authorities know. The main authorities in question are Skatteverket (the Tax Agency) and Försäkringskassan (the Social Insurance Agency).

This also applies to any family members who move with you – any over-18’s should send in their own documentation to Försäkingskassan about their move abroad. If you’re moving abroad with anyone under 18, you can include them in your own report to Försäkringskassan.

You can register a move abroad with Försäkringskassan on the Mina sidor service on their website, here (log in with BankID).

This doesn’t mean that you’ll lose your personnummer – you’ll still be able to use it if you ever move back to Sweden – but you will no longer be registered as resident in Sweden.

Similarly to Försäkringskassan, you will also need to report any children you are bringing with you, and both legal guardians must sign the form, whether or not both guardians are moving abroad or not.

In some cases, you may still be liable to pay tax in Sweden even if you live abroad – particularly if you are a Swedish citizen or have lived in Sweden for at least ten years. This could be due to owning or renting out property in Sweden, having family in Sweden, or owning a business in Sweden.

You can tell the tax agency of your plans to move abroad here.

If you are moving to another country with the a-kassa system, such as Denmark or Finland, it may pay to wait until you have joined a new a-kassa in that country before you cancel your membership in Sweden.

This is due to the fact, in some countries, you only qualify for benefits once you fulfil a membership and employment requirement. In Sweden and Denmark, you must have been a member for 12 months before you qualify. In Finland, the membership requirement is 26 weeks.

If you qualify for a-kassa in Sweden before you leave the country, you may be able to transfer your a-kassa membership period over to your new a-kassa abroad and qualify there straight away, but this usually only applies if your period of a-kassa membership is unbroken.

Check what applies in your new country before you cancel your membership in Sweden – your a-kassa should be able to help you with this.

Similarly, if you are a member of a Swedish union or fackförbund, let them know you’re moving abroad.

If you’re moving to another Nordic country, they might be able to point you in the direction of the relevant union in that country, if you want to remain a member of a union in your new country.

If you’re moving to another EU country, you may be able to remain a member of your Swedish union as a foreign worker with the status utlandsvistelse.

If you chose to do this, you will usually pay a lower monthly fee than you do in Sweden, and they can still provide assistance with work related issues – although it may make more sense to join a local union in your field with more knowledge of the labout market.

If you have worked in Sweden and paid tax for any length of time, you will have paid in to a Swedish pension. You retain this pension wherever you move, but you must apply for it yourself.

To do so, you will need to give details of when you lived and worked in Sweden, as well as providing copies of work contracts, if you have them. If you have these documents before you leave Sweden, make copies so that you can provide them when asked.

If you move to the EU/EES or Switzerland, you may also have the right to other, non-work based pensions, such as guarantee pension for low- or no-income earners, or the income pension complement (inkomstpensionstillägg).

Currently, you can receive your Swedish pension once you turn 62 – although there is a proposal in parliament due to raise pension age to 63 for those born after 1961 from 2023, so this may change.