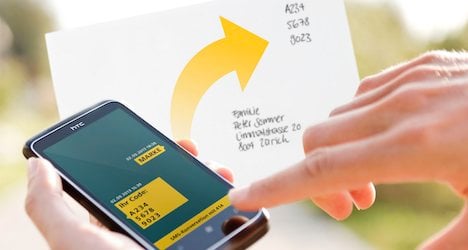 Under a trial one-year project, begun on Monday, customers can request a code via an SMS text message or a Swiss Post smartphone app, that can be written on the envelope in the place of a regular stamp.

The postal company said “this easy way of franking” costs 1.20 francs and is available for A class standard letters, 20 centimes more than for a regular stamp.

Swiss Post is teaming up with telecom providers Swisscom and Sunrise in the initial phase of the trial.

The company has allowed customers to buy stamps online and print them at home since 2006 through its WebStamp programme.

The SMS stamp adds a further service for people on the move who do not have access to a printer and do not have stamps handy for mailing a letter.

A code will be sent to the mobile customer that has to be copied in the upper right-hand corner of the envelope, which must be posted in the nearest letter box.

It is valid for use within 10 days.

The code can also be obtained through Swiss Post’s smartphone app, versions of which are being prepared for iPhones and Android mobiles.

Swiss Post said it wanted to test the acceptance of the SMS stamp before definitely launching the service “and adding further products”.

Consumer groups welcomed the new service but are unhappy with having to pay an extra 20 centimes for it.

“As long as (Swiss) Post maintains a monopoly for mail, sending A class letters should never cost more than one franc,” Michel Rudin, director of the consumers’ forum group told the ATS news agency.