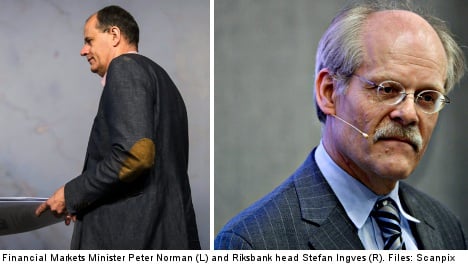 “A very clear piece of wisdom to draw from the crisis is that the risks of financial systems’ are easily underestimated,” said Peter Norman and his Moderate party colleague Anna Kinberg Batra, who heads the parliamentary finance committee.

“The Lehman crash in September 2008 is a clear example of how problems in one sole bank can spread quickly and rock the entire global financial system,” they continued in an op-ed published in the Dagens Nyheter (DN) newspaper on Monday morning.

Bloomberg commented the news on Monday by underlining that Sweden’s four biggest banks already operated under more tightly held capital requirements than many of its European colleagues.

Nordea, Swedbank, Handelsbanken, and SEB must currently make sure ten percent of its risk-weighted assets are made up of core Tier 1 capital.

News of the tougher rules sent bank shares tumbling on the Stockholm stock exchange on Monday, which was made public in an op-ed in DN.

To put the level into context, the European recommendation – the Basel Committee on Banking Supervision headed by Sweden’s Riksbank chief Stefan Ingves – set a seven-percent minimum to kick in the year 2019.

Not only has Norman tightened the thumb screws on Sweden’s banks, but he has also decided to put the regulatory responsibility onto the shoulders of the Financial Supervisory Authority (Finansinspektionen – Fi ), rather than the Riksbank central bank.

“Today’s proposal from the government marks a defeat for Ingves, who had argued that the central bank is best suited to handle macro-prudential supervision,” Bloomberg reported.

The news was welcomed, however, by the Financial Supervisory Authority.

“It’s good for state authorities to be given clear mandates and know who has responsibility for what,” agency head Martin Andersson said in a statement on Monday.

“Decisions have been taken behind closed doors for far too long, and it’s good that that time is now behind us.”

Norman and Kinberg Batra also added in their op-ed that banks would from now on be asked to help pay for Sweden’s currency reserve.

“The banks’ extensive financing in foreign currency motivates an extra large currency reserve, which means (the banks) should help out and pay its costs,” the politicians wrote.

They also plan a Stability Council, which will consult on financial matters rather than have policy making or regulatory powers, and amendments to a Stability Fund.