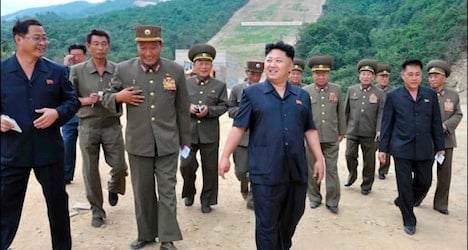 The Masik ski resort has been heavily promoted by the North's propaganda machine since Kim visited it in June.

Kim wanted the facility — with 110 kilometres of multi-level ski runs, a hotel, heliport and cable cars — completed by the end of the year.

The North's Skiers Association said Saturday that ski courses have already been built with a hotel and other facilities nearing completion.

But "some countries" are blocking the import of "cableway equipment" for the resort, it said in a statement.

"This is a wanton violation of the UN Charter clarifying that sanctions should not impose sufferings and damage on the peaceful existence and activities of mankind and the people in relevant countries," it said.

Swiss company Bartholet Maschinenbau had reportedly all but agreed to sell mechanical chair lifts and cable cars to Pyongyang.

But Switzerland's State Secretariat for Economic Affairs (Seco) said on Monday that it had blocked the deal, reportedly worth seven million francs ($7.6 million), after the Swiss government expanded its sanctions on the North in July.

SECO said selling supplies to the ski project fell under the expanded sanctions on luxury exports to the nuclear armed country.  According to a report in Swiss daily Le Temps Monday, the world's leading ski lift provider, Austria's Doppelmayr, had turned down the North Korean order "for political reasons", as had French firm Pomagalski.

The North's association insisted the resort was aimed at providing its citizens with "highly civilised and happy living conditions and make them enjoy all blessings".

"Cableway equipment for the ski resort do not produce any rocket or nuclear weapon," it said.

"If the governments of some countries consider that ordinary inhabitants of (North Korea) should not be allowed to use the ski resort, it is an unpardonable insult to its social system and people."